(Longmont, CO) –  No matter what else happens in the year 2020, Oskar Blues Brewery has a packed schedule of fall releases. The brewery, which crafts year-round offerings such as the Can-O-Bliss IPA Series, Dale’s Pale Ale, and Mama’s Little Yella Pils, announces three seasonal releases: Slow Chill Dunkel rounds out the Slow Chill Series of crisp, clean lagers; Ten FIDY Imperial Stout returns as the biggest, baddest stout in a can; and Death By Coconut Irish Porter completes the Death By Series of decadent porters with chocolatey coconut goodness. All three seasonals will be available soon for a limited time, on shelves nationwide. 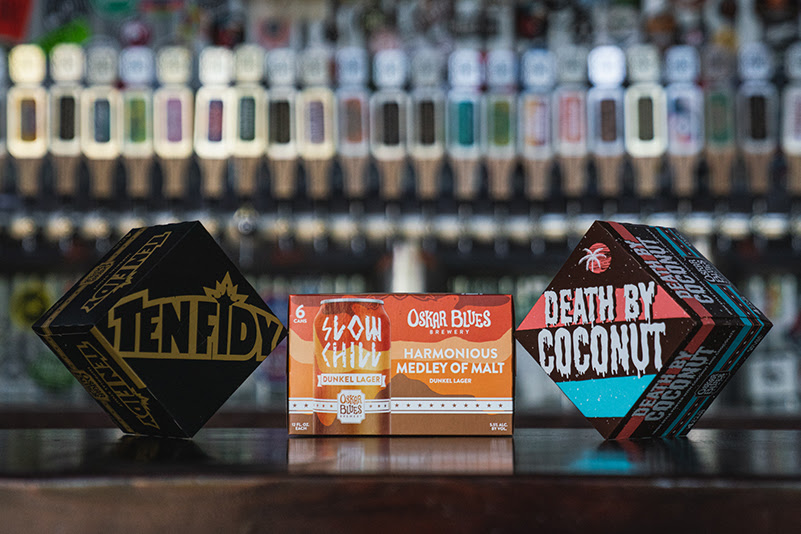 Slow Chill Dunkel (5% ABV) forecasts a crisp maltiness reminiscent of fall mornings in the Rocky Mountains. Pilsner and Munich malts create rich aromatics of honey and brown sugar, while fresh-baked, wheat-bready goodness washes over the palate with notes of toffee, pie crust and biscuit. With its dark amber color, the refreshing lightness of Slow Chill Dunkel sneaks up on you like the first chilly morning in September. Oskar Blues’ head brewer Juice Drapeau explains, “Lagers aren’t just for summer – this dunkel will drink well all the way into December. It’s the best way I can think of to say, ‘Peace out, 2020.’” Slow Chill Dunkel is now available nationwide in 6-packs of 12 oz. cans and on draft.

Ten FIDY Imperial Stout (10.5% ABV) makes no apologies for being the thickest, darkest, roastiest stout in a can. A gargantuan malt bill in this beast of a beer produces a larger-than-life stout with overwhelming coffee and chocolate flavors. Brewed since 2007, Ten FIDY has a new look in 2020 – a black and gold can to match its royally big flavor. Ten FIDY Imperial Stout will be available nationwide September 30 in 4-packs of 12 oz. cans and on draft.