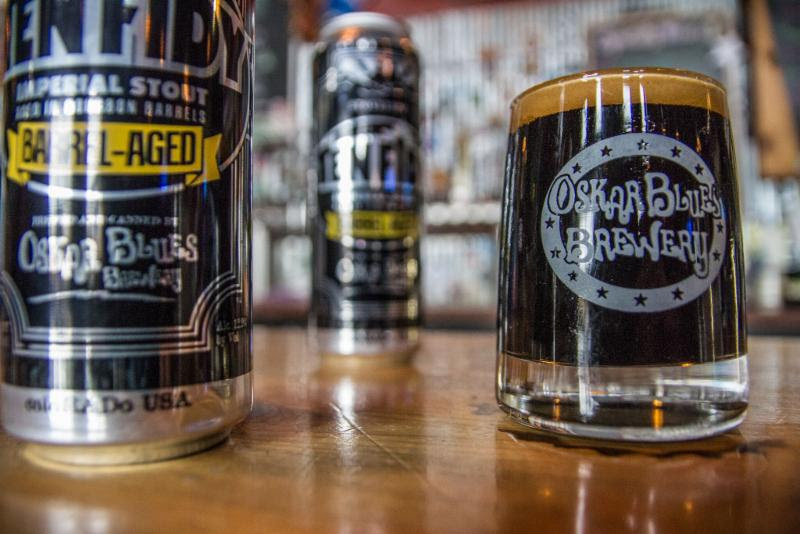 Oskar Blues Brewery took its Ten FIDY Imperial Stout and stashed it in a blend of Buffalo Trace and Heaven Hill bourbon barrels for a minimum of eight months. The result is a cool and drinkable concoction that gets more complex with each sip. Barrel-Aged Ten FIDY clocks in at 12.9% ABV and will be available on draft and in 19.2oz. stovepipe cans in limited amounts.
“Aged through four seasons and from a blend of the top bourbons around, this Ten FIDY has morphed into a monster of cranked up flavor,” said Head of Brewing Operations Tim Matthews. “This stout is loaded with inimitable flavors consisting of espresso, burnt sugar, rich chocolate and caramel notes, which are combined with the vanilla, oak and bourbon flavors that have been smoothed out from maturation.”
Just to up the ante, for the third year, Oskar Blues is dropping a taproom ONLY Java Barrel-Aged Ten FIDY (12.9% ABV). Aged just like the Barrel-Aged Ten FIDY, the Java-infused beer is mixed with Hotbox Roasters cold brew made with a blend of Mexican and Brazilian beans.
Barrel-Aged Ten FIDY will be nationally distributed, so those interested in enjoying it outside of Colorado or North Carolina can ask their local CAN shop or craft beer store to get some and/or search Oskar Blues Beer Finder atwww.oskarblues.com/beerfinder.
Barrel-Aged Ten FIDY and (One Day Only) Java Barrel-Aged Ten FIDY Tapping Events on Saturday, Nov. 11
The limited release events will be held at the Oak Room in Longmont, CO (entrance is on the Northwest side of the brewery) and the Tasty Weasel Taproom in Brevard, NC. Sales will begin at 10am and numbered wristbands will be handed out at 9:30am so get in line early.
To ease the pain of the wee hours, the Oskar Blues CHUBwagon will be slingin’ breakfast food in Brevard and CyclHOPS Bike Cantina will be bringin’ breakfast burritos to the party in Longmont. Plus Hotbox Roasters will be on the scene with the caffeine.
Tasty Weasel Brevard, NC Details and RSVP
Oak Room Longmont, CO Details and RSVP
We want to share the love of this rare liquid, so we’ll have limited amounts of drafts available for sampling and cans available for purchase (10 cases of BA FIDY and 2 cases of Java BA FIDY per person limit). Crowlers and growlers will not be available for purchase during the tapping events.
Bonus Tapping at Oskar Blues Boulder Taproom on Thursday, Nov. 9
A special, very limited tapping of both the Barrel-Aged Ten FIDY and Java Ten FIDY will be flowing at the new Oskar Blues Boulder Taproom beginning at 6:30pm. Get there early because when it runs out, it’s out.
OH! Before we forget…. Let’s get ready to RUM-ble!
Stay tuned for more info on the one day only Rum Barrel-Aged Death By Coconut taproom drop in Brevard, Boulder and Longmont in Mid-December.
About Oskar Blues Brewery:
Founded 20 years ago in Lyons, Colorado, Oskar Blues Brewery launched the craft beer-in-a-can apocalypse with their hand-canned, flagship brew Dale’s Pale Ale. Today, Oskar Blues is one of the fastest growing breweries in the country and operates breweries in Colorado, North Carolina and Texas. Oskar Blues produced more than 200,000 barrels in 2016 and Dale’s Pale Ale earned the nation’s top-selling craft can six-pack at U.S supermarkets. The original craft beer canners continue to push innovation with creations like The CROWLER, Hotbox Coffee Roasters, B. Stiff & Sons Old Fashioned Sodas, The Oak Room, Oskar Blues Fooderies, REEB Cycles and the cycling inspired accommodations and event space at REEB Ranch in North Carolina. Oskar Blues is available in all 50 U.S. states, Washington, D.C., parts of Canada, Puerto Rico, Sweden, Norway, Finland, Spain, France, the Netherlands, Belgium, Luxembourg, the U.K., Ireland, Australia, New Zealand, Chile, Brazil, and South Korea.
To keep up with all things Oskar Blues, visit http://www.oskarblues.com/