(COOPERSTOWN, NY)  – 2018 is a year of expansion for Brewery Ommegang. The brewery is introducing a variety of new beers and undertaking a major renovation of the visitors’ center. Now, Ommegang is thrilled to announce the installation and commissioning of a new canning line and the launch of the brewery’s first on-site-only can release, the New England-style IPA Neon Rainbows, which to-date has been available only in very limited quantities on draft. 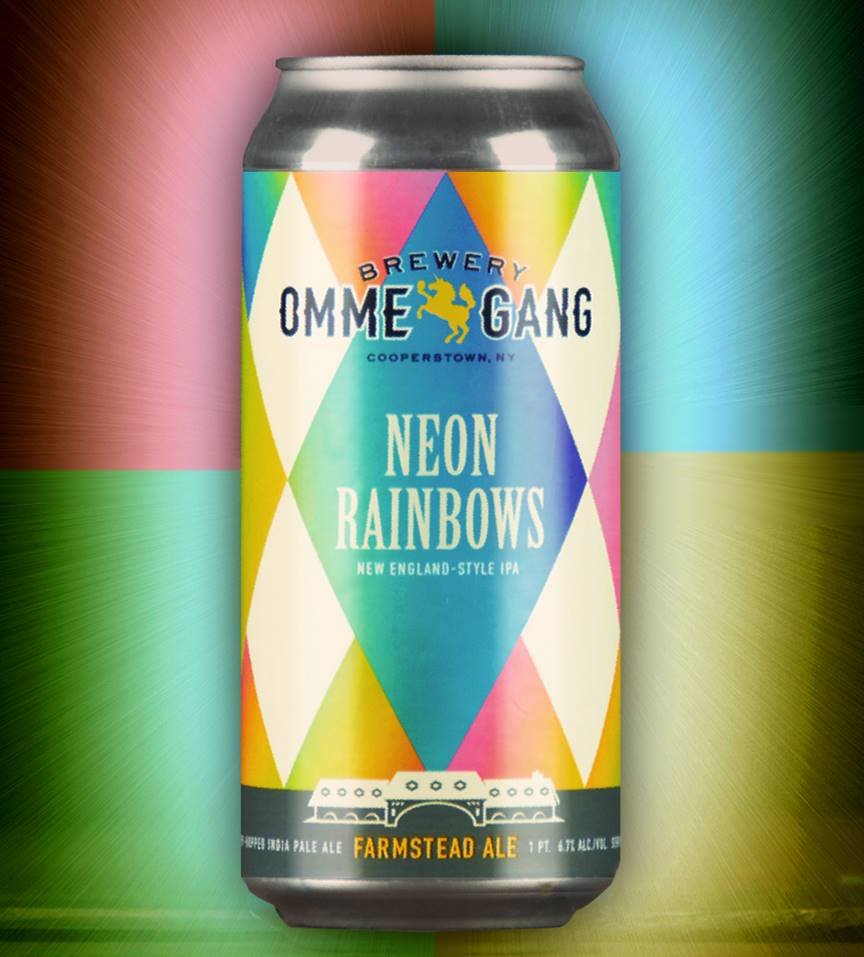 Neon Rainbows follows Hopstate NY as the second release in the brewery’s Farmstead Series, beers that draw inspiration from Ommegang’s home on the 140 acre site of the former Lynes Hop Farm in Cooperstown, NY. The double dry-hopped NEIPA began as a one-off experiment for the brewery’s legendary Belgium Comes to Cooperstown festival, but it quickly became a local favorite. Originally brewed in tiny 15-gallon batches for special events, the brewery’s new canning line will now allow for production batches small enough to ensure this delicate beer is delivered to visitors to the brewery at peak freshness.

Bursting with juicy tropical fruit flavors and aromas and paired with a pillowy mouthfeel and low bitterness, Neon Rainbows is 6.6% ABV and 45 IBUs. The beer is brewed with pilsner malt and flaked oats for a smooth malt profile and creamy body. Neon Rainbows is so named for the rainbow of hop varietals in the recipe. The beer’s aroma features tropical fruit, pineapple, mango, and strawberry with hints of melon, and the hop profile is juicy and citrusy thanks to Magnum, Mosaic, Simcoe, Citra, Centennial, Topaz in primary hopping, and Mosaic, Simcoe, Citra, Topaz dry-hopping.

The first canned run of Neon Rainbows will deliver 16 oz. four-packs for sale only at the brewery on Saturday, May 26 at 11 am with a one case per customer limit.

The maiden canning run for the new system was on Tuesday, April 24, when Ommegang’s Nirvana IPA was packaged in 16-ounce cans for the very first time. “Different beer styles have different packaging formats that suit the style and the most common drinking occasions,” explained Rick DeBar, Ommegang’s Technical Manager. “For hop-forward beers and others that tend to travel with our drinkers to mountain tops, beaches, concerts and beyond, cans are an ideal format. Not only do they provide additional protection against light strike, but they’re more environmentally friendly on multiple levels as well, something we always strive to take into account.”

A canning contract with Utica’s FX Matt Brewery has enabled Ommegang to have both Witte Wheat Ale and Nirvana IPA in cans for distribution in New York for the past two years, but the desire to produce cans in Cooperstown began more than four years ago.

“We’ve been talking about canning our beers for a number of years, and with the help of FX Matt, we were able to get two of our most popular warm weather offerings into cans while we looked for the right canning line for our facility. It took us more than a year to find a supplier that could build us the line we wanted, meeting our strict quality standards while also integrating with the space we have available in our packaging hall,” says DeBar.

Ommegang’s new canning line accommodates 12, 16 and 19.2 oz cans and produces about 40 cans per minute. It occupies a compact space within the brewery’s packaging facility, even tying into the existing bottling line once the cans are filled and sealed.

“Having a smaller canning line enables us to produce small runs and to experiment with a variety of beers in this packaging format,” says DeBar. “It also help us ensure that cans will always be fresh since there won’t be large volumes sitting on shelves.”

Current Ommegang beers in cans are Nirvana IPA, Witte, Fruition, and Short Sleeve Saison, all canned at FX Matt and available in NY. Ommegang has several other canned beers in the works for 2018 and will share details of those beers throughout the year.

Brewery Ommegang opened in 1997 to brew imaginative craft beers across a variety of styles, with particular emphasis and respect for Belgian brewing traditions. Ommegang brews nine ales year-round, as well as an extensive and innovative range of seasonal and specialty ales. The beers have won a national following by connoisseurs of fine beer and are distributed in 46 states and internationally. Ommegang is located on a 136-acre farmstead in Cooperstown, New York and offers free daily tours and inexpensive tastings as well as a 75-seat café, a well-stocked brewery store, and an annual calendar of public events including a summer concert series and a legendary beer festival, Belgium Comes to Cooperstown. Ommegang is open every day of the year except for Thanksgiving, Christmas Eve, Christmas Day, New Year’s Day, and occasional special event days. For more information, contact [email protected], call 1-607-544-1800, or visit www.ommegang.com. Ommegang is a member of the Duvel family of fine beers. Follow Ommegang on Twitter: @BreweryOmmegang, Facebook.com/Ommegang, and Instagram: @BreweryOmmegang