Ommegang Announces Game of Thrones King in the North, a Barrel-Aged Imperial Stout

(Cooperstown, NY) — Brewery Ommegang and HBO Licensing & Retail have announced the newest beer in their collaborative series inspired by the award-winning drama Game of Thrones. King in the North, a beer brewed for Jon Snow, is the fourth and final beer in this year’s Royal Reserve Collection, a series of four limited release beers, each designed and brewed as an homage to one of four epic figures engaged in the battle for the Seven Kingdoms.

Brewed to sustain a leader through a long, dark night, King in the North is a barrel-aged imperial stout. The beer will be available at the brewery and at retail as of Black Friday, November 23, on draft and in 750ml bottles. The suggested retail price per bottle is $12.99.

King in the North will be released alongside a one-of-a-kind gift pack, just in time for the holidays. The gift pack features one 12-ounce bottle of each of the four Royal Reserve Collection beers and a collectible Game of Thrones glass. The suggested retail price for a gift pack is $24.99. 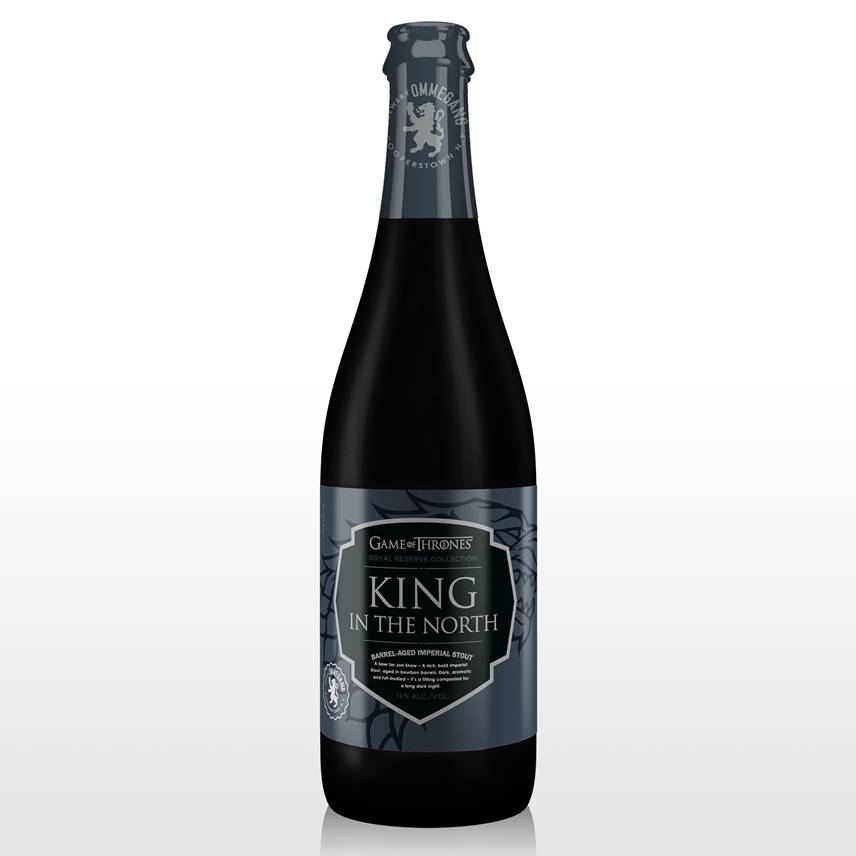 “There was only one character with whom we could end the Royal Reserve Collection,” said Doug Campbell, Brewery Ommegang president. “I don’t think we’re alone in our hopes for Jon Snow. And for those who missed one of the Collection during the year, we’re pleased to offer the opportunity to get all four at once, along with a glass in which to serve them.”

“We’ve now arrived at our fourth and final Royal Reserve beer which celebrates Jon Snow with a big, bold, barrel-aged stout for the long cold nights to come,” said Jeff Peters, vice president of licensing & retail at HBO. “We expect this one to bring our fans to their feet to toast the King in the North!”

King in the North pours jet black with a thick tan head. Aromas of roasted malt, coffee, and chocolate blend with those of oak, bourbon, and vanilla. The flavor is rich and full with notes of chocolate, vanilla, coffee, and roasted malt up front followed by smooth bourbon and a hint of oak. The finish is thick and chewy with oatmeal creaminess, and pleasant lingering roast. King in the North pairs well with funky aged cheeses, rich dark meats and decadent desserts. It also makes a great dessert on its own.

The Royal Reserve Collection features four new beers in the brewery’s Game of Thrones-inspired series with HBO. All of the beers will be available on draft and in 750ml bottles. The series began in April with Hand of the Queen, a barleywine, and was followed in June by Queen of the Seven Kingdoms, a sour blonde blend. Mother of Dragons, a smoked porter and kriek blend will arrive in September before King in the North and the gift pack.

Founded in 1997 on the site of an old hop farm near Cooperstown, NY, Brewery Ommegang brews imaginative beers in a wide variety of styles, with particular emphasis on Belgian brewing traditions. For more information, visit ommegang.com, or follow us on Facebook at facebook.com/Ommegang, on Twitter at @BreweryOmmegang, and on Instagram at @BreweryOmmegang.

HBO Licensing & Retail, a division of Home Box Office, Inc., partners with best-in-class licensees around the world to give HBO’s global audience new and exciting ways to engage with their favorite shows. The division leverages iconic, award-winning HBO programs such as Game of Thrones, VEEP, Sex and the City, Silicon Valley, Insecure, The Sopranos, Big Little Lies, True Blood and more to create officially licensed consumer products, innovative merchandise programs, retail activations and live immersive experiences. HBO Licensing & Retail works across a broad range of product categories, including collectibles, apparel, publishing, live branded experiences, digital gaming, fashion and beauty collaborations, luxury accessories, and beyond. Officially licensed HBO merchandise can be purchased in retail stores around the world, online in the US at http://store.hbo.com, and at the groundbreaking HBO retail hub, the HBO Shop®, located at 42nd and 6th Avenue in New York City.