(Fort Collins, CO) – Odell Brewing has released their latest year-round beer, Rupture, a Fresh Grind Ale. Rupture introduces a unique process where whole-flower hops are ground up on-site at the brewery moments before they’re added to the beer. 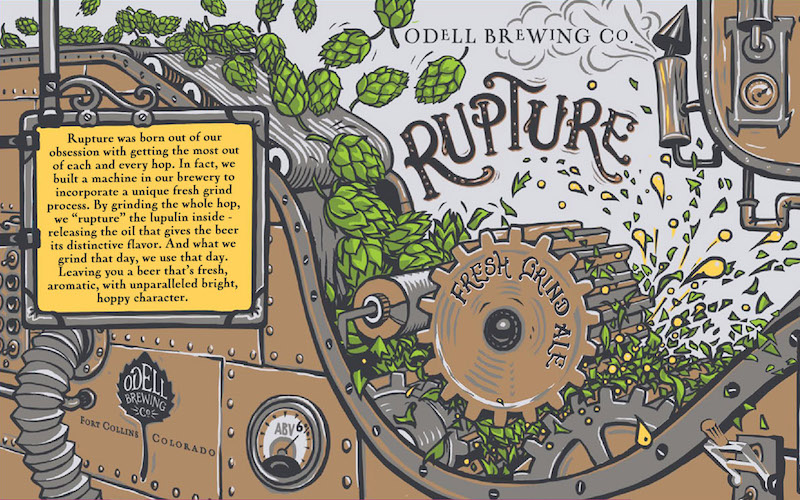 “It’s no secret that we love hops. While we work with both whole flower and pellet hops across our other beers, Rupture gave us an opportunity to try something really different,” said Brendan McGivney, COO. “By grinding the hops, we unlock an unparalleled amount of hop aroma. We built the recipe around highlighting that

To achieve this unique flavor profile, Odell installed a custom-built hammer mill at the brewery, a piece of equipment that’s typically only operated by hop merchants. “It’s a wildly inefficient process, but once we tried the test batches, we knew it was worth the effort,” said Brewing Manager, Bill Beymer. “What we grind that day, we use that day. There’s a bit of a ticking clock that starts as soon as you rupture the lupulin. To get the hops at their peak, you need to move fast. It’s a lot like coffee. We all know fresh ground beans make for a more complex cup of joe. Rupture applies those same principles to hops.”

Rupture embodies Odell’s commitment to get the most out of each and every hop and follows in the footsteps of other innovative hop-forward beers like Odell IPA, Myrcenary Double IPA, and Drumroll American Pale Ale. Rupture comes in at 6.0% ABV and is now available across Odell’s 15-state footprint. For more check out the Rupture Digital Media Kit.