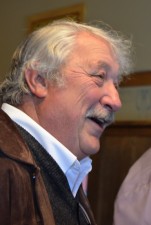 (Fort Bragg, CA) – Sam Kraynek brings over 40 years of managerial experience to North Coast Brewing Company’s new position of Controller. Sam will be responsible for the financial reporting of the company and establishing policies and internal controls that protect the organization’s assets. NCBC’s President Mark Ruedrich said he is pleased to bring Sam into the business because “We’ve been looking for the right person to be our company controller for some time now. Sam’s leadership skills and his history of innovative management, strategic planning, marketing, sales, manufacturing and finance will strengthen and benefit North Coast Brewing Company.”

Sam’s easy-going, friendly personality belies his hard-driving work ethic. Born, raised and educated in Pennsylvania, his first professional position was an In-Charge Auditor with Ernst & Ernst in Cleveland Ohio. He moved on to work as an Auditor Supervisor for Beatrice Companies and within a decade became President and General Manager of Rosarita Mexican Foods where he developed the idea of manufacturing vegetarian refried beans, now the best-selling refried beans on the market.

After his tenure at Rosarita, Sam held various management positions with a number of companies including Vice President and General Manager of the $70 million Bakery Distribution Division of International Multifoods and Vice President of Sales and Marketing for Bay State Milling, a $200 million flour milling operation. In 1997 Sam answered an ad that led him to the Mendocino Coast. He became CEO of Thanksgiving Coffee Company where he worked for the last 15 years.

Sam began working at North Coast Brewing on April 1, 2013 and he says he’s delighted to be a part of a business that makes quality products, encourages clear communication and ongoing collaboration among its staff and employees and values and respects its workers. In addition, Sam said, “It’s not just about dollars and cents. North Coast Brewing is about community and people and making our coast (and our world) a better place to live, and I like that!”

Sam is an active participate and volunteer in the community. He is past chair and director of the Executive Committee of the Mendocino Coast Chamber of Commerce and currently serves as a director of the Mendocino City Community Services District. He also serves on the Wine and Mushroom and Finance committees of Saint Anthony’s. When he’s not working or volunteering, Sam likes to garden, enjoy the ocean, and travel with his wife, Ginger to visit their children and four grandchildren. In addition, and of course, Sam likes to relax after work with one of North Coast Brewing’s fine craft beers.

A pioneer in the craft beer movement, North Coast Brewing Company opened in 1988 as a local brewpub in the historic town of Fort Bragg, located on California’s Mendocino Coast.

Under the leadership of Brewmaster Mark Ruedrich, it has developed an international reputation for producing exceptional quality beers that are distributed nationally, in Asia, Europe, Australia and South America. The brewery has won more than 70 awards in national and international tasting competitions. In addition to Red Seal Ale, Old Rasputin Russian Imperial Stout, Scrimshaw Pilsner, Brother Thelonious Belgian Abbey Style Ale and other fine North Coast brands, the brewery has resurrected the old Acme label with a heritage dating back to the San Francisco of the 1860s.