(New Orleans, LA) –  NOLA Brewing prides itself with creating beers that reflect the unique qualities of the city it brews in. On October 17th, 2016, the New Orleans brewery is releasing their first twelve can multipack. NOLA Brewing took their three most popular 12 oz brews to create the appropriately titled NOLA “Jam Box” that will be available in local retail stores. 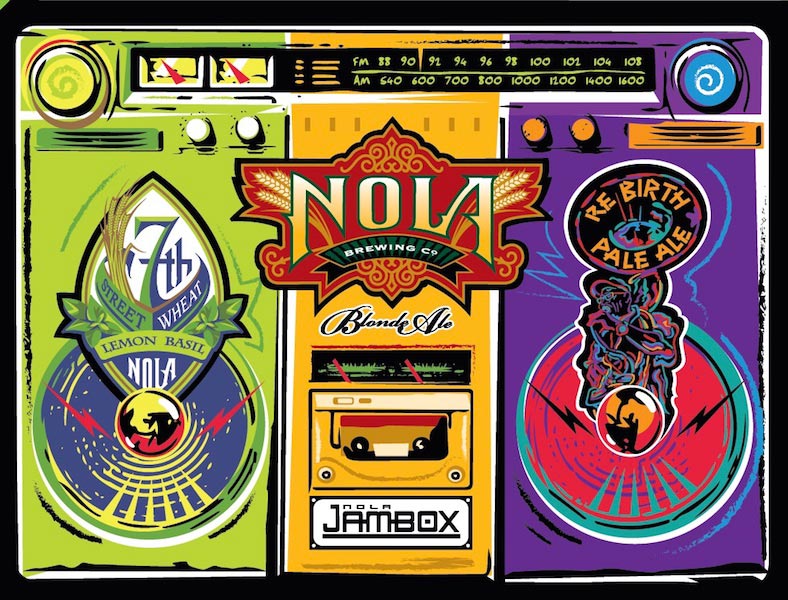 “When we decided it was time to package a twelve pack, we were told it was music to people’s ears,” says Dylan Lintern, COO of NOLA Brewing. “In New Orleans, we love a good jam session, so we have created the Jam Box for the occasion!”
The “Jam Box” will feature four cans each of NOLA Blonde Ale, Rebirth Pale Ale and 7th Street Wheat. The twelve pack features images of the cans, descriptions, and the unique look of the stereo systems of years past. The multipack is designed to make a statement for anyone walking into a party.

“Jam Box” will be available for purchase throughout South East Louisiana in retail stores. Also available in six-packs will be NOLA Brewing’s annual beers such as the NOLA Blonde, 7th Street Wheat, Rebirth Pale Ale, NOLA Brown, four-packs of Hopitoulas, Irish Channel Stout and Mecha and their current seasonal beer in draught only, Darkest Before Dawn (Munich Dunkel).

Nola Brewing Company crafts beer for introductory craft beer drinkers AND the experienced craft beer lover. The company’s passion for crafting quality beers that they themselves want to drink translates into great-tasting beers, made from choice malts and hops brewed with over 30 years of experience. However, the company goes beyond just developing great beers. Heavily entrenched as a thread in the fabric of New Orleans, NOLA Brewing Company brews a cultural experience in each glass. NOLA Brewing is located at 3001 Tchoupitoulas Street in New Orleans, LA and can be found at nolabrewing.com, and on Facebook.com/Nolabrewing and is @NOLABrewing on Instagram and Twitter.