(Cincinnati, OH) – Hugh (5.4% | 10 IBU) is the newest brew to join our can cadre. This traditionally brewed Bavarian-style Hefeweizen serves light notes of clove and banana atop a creamy yet dry wheat character. Cares drift by the roadside as Hugh leans into turns on his motorbike, passing blurred golden wheat fields, his chuckles drowned out by the guttural groan of his thrusting engine. 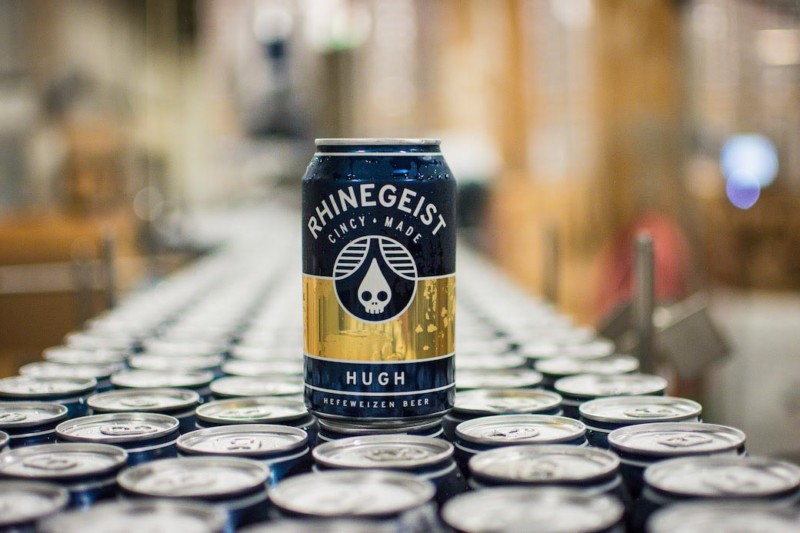 How did Hugh come to be?

We were looking to brew a light refreshing beer for the summer to fall transition, so the Bavarian Hefeweizen made perfect sense.

What’s the brewing history behind this beer?

In the middle ages the Germanic tribes began to brew a much paler ale than usual. The reason? These brewers used the most abundant and readily available brewing ingredients. For the Germans, wheat grain was one, as was barley, and the use of both to brew one beer brought the inception of the Weissbier – weisse meaning white. They were so much lighter than the traditional dark beers that the term “white beer” became a common naming convention.

There are sources that believe Weissbier to be one of the oldest styles of beer, a style created by farmers simply gathering the grains at hand. And some say that the world’s oldest established brewery, Brauerei Weihenstephan in Freising, Germany, brewed similar styles as early as 1040 AD. Today, there are four main styles of Weissbier: Southern German Weissbier, Berliner Weisse, Belgian Witbier and American Wheat beer. The Southern German Weissbier, more commonly known as Weizen or Hefeweizen.

And the Hefeweizen in particular?

Simply broken down, Hefe (yeast) Weizen (wheat) is of German origin and traditionally means an unfiltered wheat beer with yeast in it. It is often referred to as “weissbier mit hefe” (with yeast). It is an ale and usually a bottle-conditioned one at that. It’s filtered, then infused with a secondary yeast strain for natural conditioning. Crafted with up to 65 percent malted wheat, the remainder of the grist is malted barley. The addition of wheat is what gives this beverage a very crisp and refreshing profile. Hefeweizens are generally highly carbonated brews, and when poured, these magnificent beers should be cloudy (from the higher proteins contained in wheat malt), pale gold to a spectrum of amber shades and with an almost-on-the-verge-of-overflowing, meringue-like crown (thick, stiff, foamy and creamy).

What are the notable characteristics of Hugh?

What makes you want to drink this beer?
Hugh Canning_092216-19.jpg
It is a low alcohol beer that is exceedingly easy to drink and pairs well with food.

Overall: A refreshing light wheat ale that is approachable to the masses.

What foods would pair well with Hugh?

This is actually a great breakfast beer paired with Weisswurst or a simple soft pretzel.

Traditionally served in a Weizenbier glass that is 500 mL in capacity and flared toward the top.