(New Orleans, LA) –  NOLA Brewing invites you to celebrate “Ten Years of Beers” on February 15th, 2019. The anniversary party will feature performances by Karl Denson’s Tiny Universe and kick off with the George Porter Trio. It will also showcase two specialty beers with a reappearance of Moon Shoes IPA and the second Sucré release of a Blackberry Cobbler Stout. 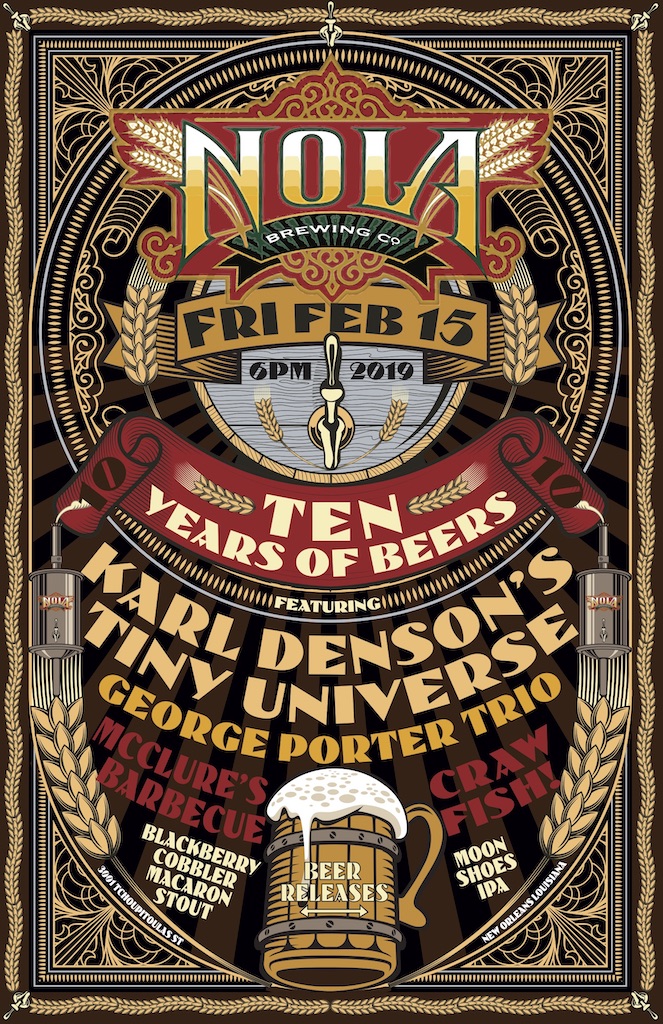 NOLA Brewing was founded in 2008, and the first NOLA beer was produced on March 3, 2009. Ten years later, NOLA Brewing has eight year-round beers, four seasonal beers, the NOLA Funk Series, and two monthly releases as part of the Lagniappe Series and the Offbeat  Series. NOLA Brewing beers can be found in Louisiana, Mississippi, Alabama, Florida, Tennessee, Texas, and Pennsylvania.

“It’s amazing to see everything we have accomplished over the past ten years,” says Dylan Lintern, COO of NOLA Brewing. “We want to make sure our anniversary party reflects our excitement from what we have done as such a small brewery as well as the growth of the tap room and the craft beer scene in our city since our first beer launch.”

“Ten Years of Beers” will take place at NOLA Brewing, 3001 Tchoupitoulas Street. Doors open at 6pm and the party will last until 11pm. George Porter Trio will kick off the party at 7pm followed by Karl Denson’s Tiny Universe at 8:45pm.

NOLA Brewing knows the only way to throw a great party in New Orleans is with great music, so they are honored to have Karl Denson’s Tiny Universe and George Porter celebrate with them. Masterfully incorporating elements of vintage rock, old school soul and classic funk, the inimitable saxophonist/flutist/vocalist Karl Denson and his long-standing six piece unit have delivered what is undoubtedly their strongest work yet. Along with KDTU, Denson—who the Austin Chronicle declared “embodies modern honk”—currently serves as the touring saxophonist with The Rolling Stones, while continuing to hold down his role as a founding member of the seminal funk band, The Greyboy Allstars. George Porter Jr, the bassist for the famed New Orleans funk group The Meters, has assembled a jazz and funk trio consisting of Terence Houston on drums and Michael Lemmler on piano.

NOLA will be serving a wide variety of standard and specialty NOLA beers, as well as releasing its limited release Lagniappe and Offbeat beers. “Moon Shoes IPA” is a 7% ABV India Pale Ale with 100% late addition and double dry hopped with Galaxy hops. This hazy IPA was so popular after its 2018 release, NOLA wanted to bring it back for the party due to its juicy flavor and aroma that’s out of this world.

“Sucré Blackberry Cobbler Stout” is a pastry stout brewed with blackberry cobbler macarons, blackberries, vanilla, almonds, and brown sugar. This is the second of four Sucré releases NOLA Brewing will have in 2019. This sweet pastry stout can be paired with your favorite dessert or be enjoyed all on its own at 9% ABV.

Tickets to attend the event can be purchased at tenyearsofbeers.eventbrite. com/. Early bird pricing is $10, general admission is $15 and tickets will be sold at the door for $20 on February 15th if available. Get your tickets early – once capacity is reached, no additional tickets will be released. McClure’s Barbecue, hot crawfish and draft beer will be available for purchase in the Tap Room. Parking is available in the NOLA Brewing parking lot behind the Tap Room. Must be 21+ to attend.

Nola Brewing Company crafts beer for introductory craft beer drinkers AND the experienced craft beer lover. The company’s passion for quality and crafting beers that they themselves want to drink translates into great-tasting beers, made from choice malts and hops brewed with over 40 years of experience. However, the company goes beyond just developing great beers. Heavily entrenched as a thread in the fabric of New Orleans, NOLA Brewing Company brews a cultural experience within each glass. NOLA Brewing is located at 3001 Tchoupitoulas Street in New Orleans, LA and can be found at nolabrewing.com, and on Facebook.com/Nolabrewing and is @NOLABrewing on Instagram and Twitter.