(EUGENE, OR) —Heading into fall, Ninkasi Brewing Company announces the return of its Seasonal Release Series beer, Oktoberfest, and the launch of its new Fall IPA Variety 12-Pack—both available throughout Ninkasi’s distribution footprint. Celebrating the region’s love of hops, these beers boast Northwest ingredients and flavor. Available early this month, beer drinkers can find Ninkasi’s Oktoberfest in 12oz. 6-packs, 22oz. bottles and on-draft, through the end of September.  The Fall IPA Variety 12-Pack hits the shelf mid-August, available until end of the year. 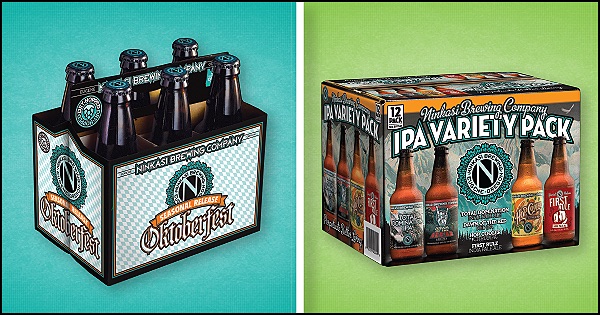 Crafted with Sterling, Crystal, Willamette, and Mt. Hood hops, this Oktoberfest marries Northwest ingredients with a traditional German style. Celebrating the harvest, this light-bodied beer has a toasty malt bouquet and just a touch of hop bitterness.

“Our Oktoberfest is a Northwest take on a classic Bavarian-style lager,” says Jamie Floyd, Ninkasi co-founder and founding brewer. “Featuring four Oregon-grown hop varieties, we dry hop this beer and let it condition for two months; this allows it to reach the perfect balance of a light-bodied lager with a subtle toasted malt complexity on par with the beers you’ll find at traditional Oktoberfest celebrations.”

“This Fall IPA Variety Pack demonstrates the flexibility of the IPA style,” explains Floyd. “A range of flavors and aromas within this single style can easily fit many occasions; it’s a convenient way to celebrate those end-of-the-season gatherings and outdoor barbeques.”

This decidedly balanced Northwest IPA celebrates our love of hops. A delightful blend of citrus and floral hop notes dominate the senses while a trio of malt adds a clean finish. Totally hoppy, totally drinkable; the name says it all.

Bursting with tropical notes, this Red IPA captures the bright complexity of El Dorado and Mosaic hops. An assertive hop presence is carried by a subtle caramel backbone, unearthing a beer that is flavorful and juicy.

Bright and tropical, this India Pale Ale brilliantly layers a citrusy blend of orange and tangerine with a robust hop profile. Crafted with real citrus and packed with as much flavor as a hop cooler, you won’t be able to stop at just one sip of this fresh and fruity beer.

First Rule IPA – 7.5% ABV, 60 IBU
First rule of this IPA is: you do not talk about this IPA. Crafted in secrecy by our band of brewers, First Rule uses a fistful of the most sought-after hops around. Juicy, citrusy, tropical and dank, this IPA is a powerful combination of hop aroma and flavor.

Learn more at NinkasiBrewing.com and use the Delicious Beer Finder to track down local Ninkasi retailers.