(Portland, OR) – Ecliptic Brewing was opened based on Owner and Brewmaster John Harris’ two passions: brewing and astronomy. As the total solar eclipse in Oregon approaches, it is only fitting that Harris’ space brewery is celebrating the big day with an eclipse themed beer and special events. 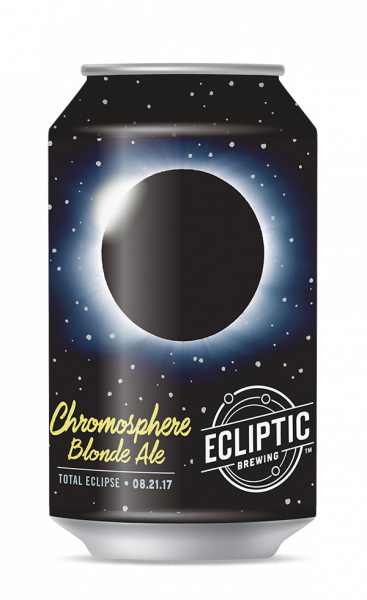 Ecliptic Brewing has started to release their Chromosphere Blonde Ale, brewed for the solar eclipse, in to their Oregon and Washington markets. The beer style was inspired by the color of the sun and the desire to have a sessionable ale to drink while experiencing the eclipse on August 21, 2017.

In addition to the beer, Ecliptic will be taking part in and hosting several eclipse themed events, detailed below.

“This day has been one that I have been thinking about for a long time and having a beer for the day was of huge importance to me,” said Harris. “The can design (done by Senior Art Director at Sasquatch Agency, Sean Haggerty) honors the event and the beer inside just as I had hoped and I can’t wait for you all to drink it while watching the eclipse.”

A sessionable ale for the solar eclipse. Amarillo and Cascade hops add citrusy flavors and aroma.

About Ecliptic Brewing
Ecliptic Brewing is a venture from John Harris, an Oregon beer icon whose background is steeped in the state’s rich craft brewing history. The name Ecliptic unites Harris’ two passions: brewing and astronomy, and as such, the brewery celebrates the Earth’s yearly journey around the sun through both its beer and restaurant menus. Executive chef Michael Molitor rotates his seasonally inspired menu every six weeks in accordance with the old world calendar. Harris’ signature beers include Spectra Hoppy Pilsner, Orbiter IPA, Carina Peach Sour Ale, and Capella Porter.