(EUGENE, OR) — Ninkasi Brewing Company is excited to announce their new summer seasonal, Peach Maiden the Shade Summer IPA, available now in 6-packs of bottles and 12-packs of cans throughout Ninkasi’s distribution footprint. A 19.2oz can will be available in May. 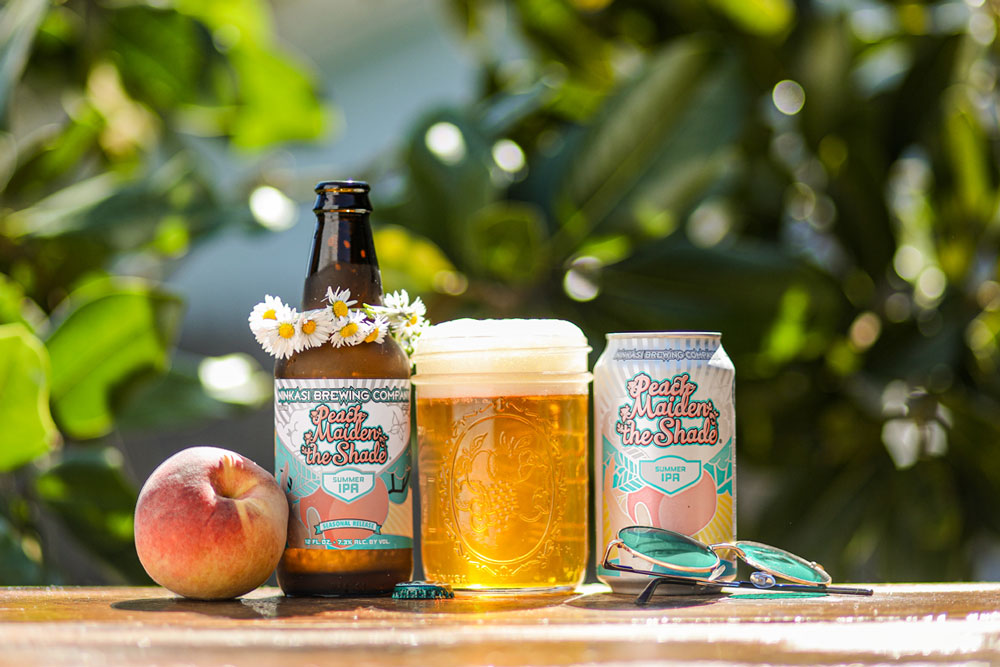 “We created Maiden the Shade for a local cultural and music festival that has been in our community for 50 years whose logo happens to be a peach,” said Ninkasi co-founder Jamie Floyd. “We decided to make a peach version of this cult classic for the festival that became a favorite of festival staff, musicians, and beer enthusiasts alike. So much so, we wanted to share it with all Ninkasi lovers.”

Additionally, Ninkasi has once again partnered with Eugene-local Glimmer Tech to create an interactive augmented reality experience activated through their packaging. When a user scans the Peach Maiden the Shade label using the GlimmerXP app, they will activate Peach Maiden: The Game, an Asteroids-like experience where gamers must defend summer by fending off intruders.

Take a sip and delight in the refreshing, tart notes of peach and grapefruit dancing freely on your tongue. That’s the essence of summer bursting from Peach Maiden the Shade. Crack one open, enjoy, and run wild.

About Ninkasi Brewing Company
Founded in 2006 by Jamie Floyd and Nikos Ridge, Ninkasi Brewing Company is the nation’s 38th and Oregon’s third largest independent craft brewery (Brewers Association, 2019). Ninkasi continues to grow from its first batch of Total Domination IPA to three brewhouses, with 55-barrel, 90-barrel brewhouses, and a 5-barrel pilot program located in Eugene, Oregon. Ninkasi’s Flagship beers are sold throughout Alaska, Arizona, California, Colorado, Idaho, Hawaii, Montana, Nevada, Oregon, and Washington. The brewery remains privately-owned and is committed to community support and giving. Ninkasi’s Beer Is Love program offers in-kind donations and support for organizations throughout its distribution footprint. Ninkasi’s first restaurant, the Better Living Room, opened on its Eugene, Oregon campus in February 2020, soon to be followed by an experience in Tumwater, Washington in September 2020.