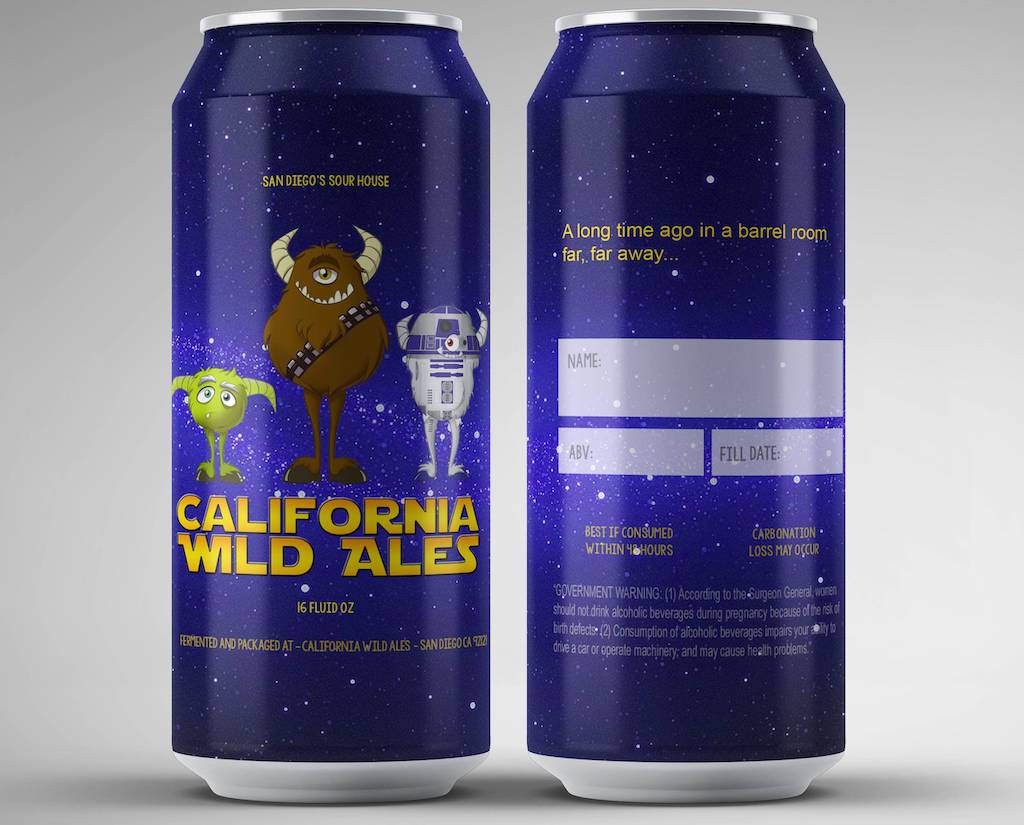 “Since we’re living in crazy times and can’t celebrate Star Wars Day in our tasting room like we did last year, we decided to hold a huge online beer release,” said Bill DeWitt, co-owner and founder of California Wild Ales. “Last year’s event was hugely popular so we hope these new series of wild ales give the sour beer community something to be excited about.”

The sour beer maker partnered with TapShack Craft Liquid Company to create a special blend of sour ale and kombucha. “As a craft beverage company, we’re committed to being innovative and providing more exciting options to our customers,” said Chris Bourgeois, co-owner of TapShack. “Working with California Wild Ales to create a sour kombucha is a logical step for us and we hope both sour beer and kombucha lovers alike give our blends a try!”

One bottle and 11 draft selections will be packaged in 16 ounce crowlers and available for online sales for curbside pickup at the California Wild Ales brewery and tasting room located at 4202 Sorrento Valley Bld., Ste. L or free local delivery on Monday, May the 4th. Customers can visit: www.californiawildales.com or call (855) WILD-ALE or (855) 945-3253 to place orders. Each order will be accompanied by stickers and artwork of the special Star War’s-inspired designed for the event.

Only (40) 16 oz. cans of each flavor are available in addition to a special bottle release of 100 500ml bottles for the event called the “ImPEARial Stromtrooper.”

·      May the Force Be With Yuzu: two-barrel wild ale blend with yuzu and sea salt

The Dark Side Lineup

·      BanAnakin Skywalker: golden sour base with caramelized bananas and toffee

·      Mango Fett: overripe mango added to the 12-month barrel-aged golden ale, before an addition of jalapeño and sea salt

·      The Dark Side: barrel-aged golden sour plus beet, pomegranate, and hibiscus kombucha from TapShack OB

California Wild Ales, San Diego’s Sour House, is San Diego’s only all-barrel-aged sour brewery. It began creating fresh and funky wild ale in 2015 and opened its tasting room in 2018. The brewery’s sour beer is aged in American, French, and Hungarian oak barrels for a minimum of nine months and uses fresh, local produce from local San Diego farmers. California Wild Ales is known for its branding, which includes characters representing the yeast and bacteria that’s used to ferment the sour beer named Lacto (short for Lactobacillus), Brett (short for Brettanomyces) and Pety (short for Pediococcus). www.californiawildales.com

Based in Ocean Beach, California TapShack’s mission is to create the best-tasting, highest-quality kombucha and cold-brew coffee possible that combines modern brewing techniques with an ancient craft. We strive to push the boundaries on kombucha and cold-brew coffee innovation and fuel the daily lives of individuals through irresistible flavor and quality that improves the feeling of well-being and health. Driven by the passion for craft beverages, owners Chris and Amanda Bourgeois created TapShack to share with the local community and beyond. www.tapshackob.com