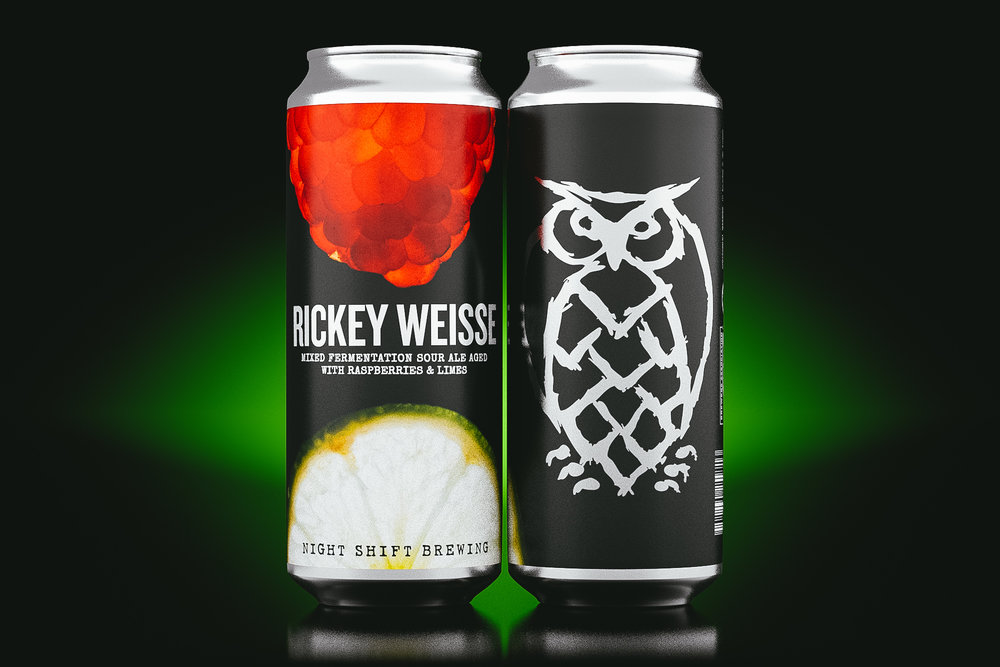 Night Shift has been canning non-sour beers for years – over 5 million cans since 2014. But starting in March, they’ll put sour beer into aluminum for the first time ever. Making the debut will be Ever Weisse, a mixed fermentation sour ale aged with kiwis, strawberries, and hibiscus. Ever Weisse will be released in both 4-pack and draft formats out of their Everett Taproom on Friday, March 2nd, and will hit Night Shift’s MA distribution channels the week of March 12th.

The reason for such a long delay in the sour can game? Quality control. Says Head Brewer Joe Mashburn, “Canning sour beers was something we always wanted to do. But due to our mixed fermentation process that leaves active lactobacillus in our sour beers, we avoided contaminating any equipment used for non-sour beers. This meant no sours through the canning line. That all changed this month.”

In early February, Night Shift Brewing expanded their production facility with the purchase of a second canning line. This development has freed up one canning line for the dedicated packaging of products that use mixed fermentation processes, while a non-sour line continues to push out flagship products like Whirlpool New England Pale Ale and Santilli American IPA.

One important distinction for Night Shift’s sours, compared to most sour beers in the market, is the mixed fermentation process utilized by Mashburn and his team. Fermenting sour beers with both lactobacillus and brewer’s yeast achieves significantly complex flavor profiles, as opposed to the more commonly used kettle sour method that deactivates the cultures during the early stages of fermentation. Through continued experimentation and research, the Production and Quality Assurance teams at Night Shift Brewing have developed a unique set of conditions that allow both cultures to coexist – hence the term “mixed fermentation.”

The brewery has been innovating this process since their inception in 2012, which saw the release of their first sour beer, Somer Weisse (which was brewed with lemongrass and ginger). At the time, there were only a handful of US-made Berliner Weisse-style sour beers in the market, and consumer interest was confined to a very select palate.

Says Rob Burns, “We’ve always tried to innovate. Where we once offered one of the only sours in the MA market, we’re now offering one of the only canned mixed fermentation sours. We’re looking forward to continuing to grow this series and bring it to a larger market.”

For the Weisse series, 2018 will see three different releases hit the local shelves. After Ever Weisse runs from March to May, the brewery is planning on a summer (June-August) of Rickey Weisse cans – a recipe that puts a twist on the classic “lime rickey” by aging the mixed fermentation sour base with raspberries and limes. Rounding out the year will be Mainer Weisse, a mainstay in the brewery’s catalog since 2012 that is aged with blueberries and cinnamon sticks, available September through November.

“We’re thrilled about the year of sour cans ahead,” says Burns. “We’re using photography on our packaging for the first time, really trying to showcase the fruits featured in beer. They’re exciting, complex labels for exciting, complex beers. We hope our customers feel the same way!”

ABOUT NIGHT SHIFT BREWING
Night Shift Brewing was founded in 2012 by a trio of friends with a shared passion for homebrewing. Through culinary inspiration and determined innovation, we aim to create memorable craft beers that offer a wide array of unique, complex flavors.