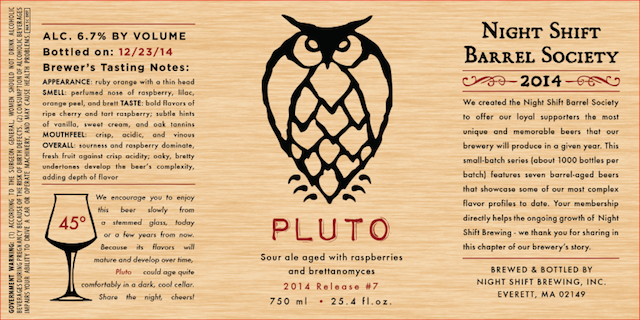 Release details are as follows:
EXTRA bottles will likely be available, but we don’t yet know how many (it’s still being bottled). We expect to know more info shortly, and will announce details once we do.

Membership bottles will be available for pickup at the taproom starting on Tuesday, December 30th at 3pm. We’ll also put Pluto on the exclusive Barrel Society draft line, so give it a try and decide when to share your bottle(s)!
And if you haven’t yet, please RSVP by 1/1/15 to our 2014 Barrel Society party on 1/10/15 – should be a great night of beer!

Once again, this is the last release of 2014. We hope you enjoyed the series of beers this year as much as we enjoyed making them. If you’ve yet to join for 2015, you can still do so online. Hope to see many of you soon!