Boynton Beach, FL – Due South Brewing Co. has announced January 31st, 2015 will be the release date for their award-winning Mariana Trench Imperial Stout. An event will be held at the brewery, located at 2900 High Ridge Rd. in Boynton Beach, FL. Tickets for the event will be limited to 300 people and will go on sale January 2nd. Special beers will be available from breweries all around the state for this festival-style atmosphere. Tickets will include a tasting glass and unlimited samples. Food trucks will be available. 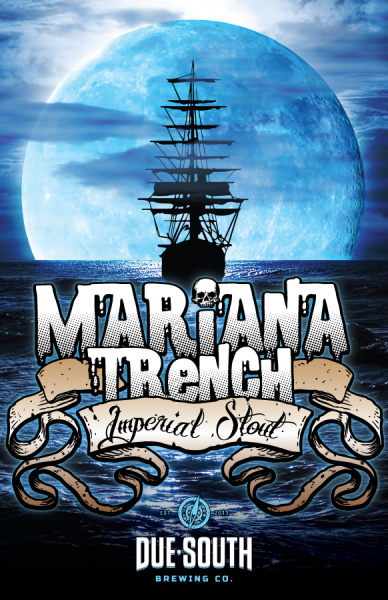 “After Mariana Trench won the gold medal in the Imperial Stout category at the Best Beer in Florida Championships this year, we knew we had something special.” says Mike Halker, founder and head brewer of Due South. “After being asked all year about the return of the Trench, we’re finally going to have it available.”

Only 1,000 bottles of Mariana Trench will be released this year with the remainder going into Woodford Reserve bourbon barrels to be released later in the year. Attendees of the event will have the first opportunity to purchase the bottles and if any remain they will be available at the tap room on Sunday, February 1st.

About Mariana Trench
Due South’s Mariana Trench is an imperial stout brewed with cocoa nibs and vanilla beans that comes in at 9.8% alcohol by volume. Released annually in January, it won the Gold Medal at the 2014 Best Florida Beer competition in the Imperial Stout category.