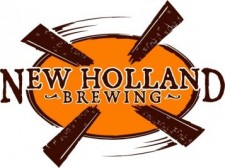 Holland, MI – Holland, Michigan-based craft brewery and artisan distiller, New Holland Brewing Company has announced plans to distribute their products to New England beginning mid-June. There will be a handful of events in Massachusetts, Connecticut and Rhode Island to celebrate the launch in the Northeast. Products will be available in the region at restaurants, pubs and retail locations.

“We’re heading east to some fun launch events in Massachusetts, Connecticut and Rhode Island” says New Holland Vice President of Sales and Marketing, Fred Bueltmann. “We’re looking forward to getting out there, meeting people and bringing some great flavors from the Midwest to our craft brothers and sisters in New England.”

“L. Knife & Son are an amazing partner,” says Bueltmann. “After over a hundred years in their business, they have a tremendous amount of knowledge about the industry. But more than that, they are passionate about the products they distribute and that’s the key to a great partnership.”

New Holland will release a variety of beer and/or spirits in each market – please go HERE for a complete listing of brands you can find in each state.

“New England and beer have a great history together,” says New Holland Co-founder and President, Brett VanderKamp. “Our forefathers were beer lovers. This is where they hung out over some pints and planned a revolution. We think craft beer pairs particularly well with historical references and social uprisings.”

Check out the first events for New Holland’s launch in New England:

Wednesday, June 18th
Rhode Island Launch at Doherty’s East Avenue
342 East Avenue – Pawtucket, Rhode Island
7:30pm – 9:30pm
Join us for a meet and greet with New Holland crew, as we bring along some of our tasty brews like – Mad Hatter IPA and Dragon’s Milk Barrel-Aged Stout.

Thursday, June 19th
Boston Launch at Stoddard’s Fine Food & Ale
48 Temple Place – Boston, Massachusetts
6pm-9pm
Join us for a meet and greet with New Holland crew, as we bring along some of our great beer and spirits like – Mad Hatter IPA, Dragon’s Milk Barrel-Aged Stout and Beer Barrel Bourbon.