(New Glarus,WI) – GABF Brett Bronze Medal was brought home this past weekend by the 2015  Golden Ale. This same award winning 2015 Golden Ale will be released to the public October 8, 9, and 10. As always there will be a two bottle per person day limit. A limited number of bottles will be available each day and sales will begin at the New Glarus Brewing Co. Hilltop Brewery no later than 9:00 a.m. and ending when the beer is gone. 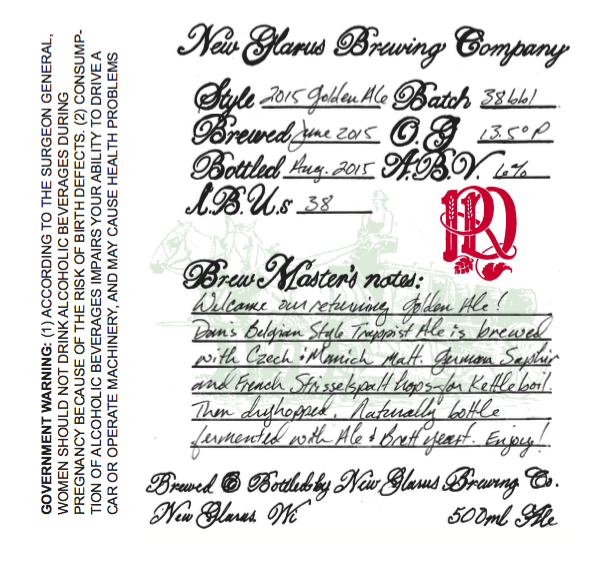 The first R&D Golden Ale was released in 2009. This year’s 2015 Golden Ale was again brewed by Diploma Master Brewer Daniel Carey. Golden Ale is a Belgian Trappist Style Ale brewed with Czech & Munich malts. German Saphir and French Strisselspalt hops were used for the kettle boil. The 2015 Golden Ale was than dry hopped and is naturally bottle conditioned with Ale and Brett yeast.

The New Glarus Brewing Company was formed in 1993 by Daniel and Deborah Carey,  who combined their considerable talents of  brewing great beer and business management skills to build a an state of the art award winning brewery that still honors the history and traditions of the Village of New Glarus. Dan and Deb Carey have worked hard to maintain their philosophy based on individuality, cooperation and the employment of 100% natural ingredients to produce world-class handcrafted beers for our friends in Wisconsin. In 2015, New Glarus Brewing Company proudly announced that the company is now employee owned.

Melvin Brewing Wins Small Brewpub of the Year + Gold & Bronze at GABF With Chuck Silva Out, Is Green Flash Brewing Looking to Sell?