(Ft. Collins, CO) – The snowfall from winter leads to great runoff in spring and New Belgium Brewing’s spring seasonal, Portage Porter, celebrates the melting off and returning to the water. The snowmelt can create intense rapids that cause thrill seekers to portage their boats, especially along the rocky banks of the Cache la Poudre river, the local source of water and fun that runs by New Belgium. To honor these water warriors who anxiously await the spring, New Belgium’s Portage Porter is coming out ahead of the warm weather, and is available now through March 2015. 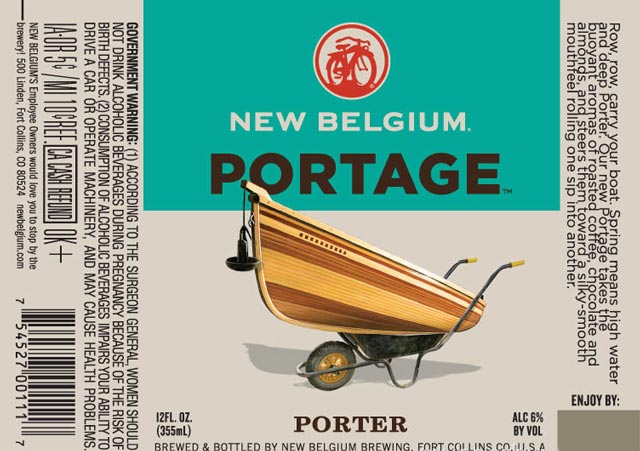 At six percent ABV and 24 IBUs, this beer is a perfect bridge style for the spring season. Portage Porter takes the buoyant aromas of roasted coffee, chocolate and almonds, and steers them toward a silky-smooth mouthfeel, rolling one sip into another. This American porter rings true to traditional style expectations, with a New Belgium twist. Added American-style hops further the original rich, roasty complexity while keeping the hop bitterness in balance. The beer pours an opaque brown, has an upfront sweetness and a creamy medium body that is easy drinking and refreshing. It features Pale, Munich, Black and Chocolate malts, along with Target and Nugget hops.

“With New Belgium Brewing so close to the Cache la Poudre river, there’s a lot of us at the brewery that love to kayak and paddle,” said New Belgium’s Collaboration Business Analyst, Tye Eyden. “This time of year is great because the snowmelt begins and the rivers start to rise. But, often times, that will bring precarious conditions and rapids that we might have to portage around. Portage Porter pays tribute to that awesome experience – the obstacles are part of the fun!”

To find New Belgium beers near you, use the New Belgium Libation Location tool: www.newbelgium.com/beer/locator.aspx.

About New Belgium Brewing Company
New Belgium Brewing, makers of Fat Tire Amber Ale and a host of Belgian-inspired beers, is recognized as one of Outside Magazine’s Best Places to Work and one of the Wall Street Journal’s Best Small Businesses. The 100% employee-owned brewery is a Platinum-level Bicycle Friendly Business as designated by the League of American Bicyclists, and one of World Blu’s most democratic U.S. businesses, and a Certified B Corp. In addition to Fat Tire, New Belgium brews nine year-round beers; Ranger IPA, Rampant Imperial IPA, Shift Pale Lager, Snapshot Wheat, Sunshine Wheat, 1554 Black Lager, Blue Paddle Pilsener, Abbey Belgian Ale and Trippel. Learn more at www.newbelgium.com.