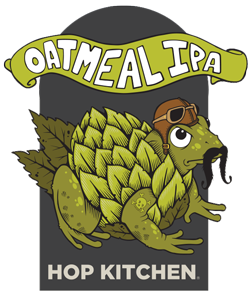 Oatmeal IPA first came to life about four years ago, when New Belgium’s brewmaster, Peter Bouckaert, visited Half Acre where he met with owners Gabriel Magliaro and Matt Gallagher. That’s when they planted the seeds for a collaboration beer.

In late 2013, the first beer in this two-part collaboration was released as Avoine IPA, an oat-spiked IPA brewed at New Belgium and released throughout Chicago (Avoine means “oats” in French). In February of this year, the Half Acre team traveled to Fort Collins, Colo., to brew the second installment: Oatmeal IPA.

This 2015 release is honey-hued with a velvety mouthfeel that offers brilliant pine, grass and guava courtesy of Citra and Centennial dry-hopping. Oatmeal IPA is ultra-tropical and appears softer than the traditional IPA, but be warned – lurking beneath the smooth oats and toasted malts, are vibrant hops with a bitter bite.

“Having Avoine IPA only available in Chicago was just too much of a tease,” says Specialty Brand Manager and Blender Lauren Salazar. “I couldn’t resist bringing it back and sharing it with everyone. You just can’t get better than the Half Acre guys—we’ll always have a soft spot for them.”

Oatmeal IPA comes in at 6 percent ABV and 60 IBUs. Pricing varies by location. To find this beer and other New Belgium beers near you use the New Belgium Libation Location tool: http://www.newbelgium.com/beer/locator.aspx.