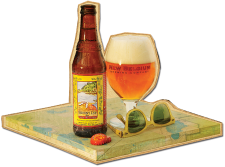 Summer Seasonal Has Long Been Spokesbottle for Water-Related Causes

Fort Collins, CO – June 10, 2009 – Skinny Dip, New Belgium Brewing’s summer seasonal, was born out of an idea to brew a low-calorie beer that quenches thirst after outdoor activities.  At a mere 108 calories, it offers a delicious alternative to traditional “light” beers and has been a best seller each summer since its introduction.  But Skinny Dip has become much more than a light seasonal, serving as the poster beer for water advocacy.  This year, a new microsite takes New Belgium’s water activism to a new level, offering resources, games and more at http://www.newbelgium.com/skinnydip.

New Belgium is nationally recognized for its progressive environmental practices.  Each of its beers is produced at a brewery where water conservation is part of the culture. Visit http://www.newbelgium.com/skinnydip to watch videos, play a witty version of truth or dare, vote for worthy causes and learn more about Skinny Dip and its connection to water advocacy.

Skinny Dip is available in most New Belgium markets April through September.