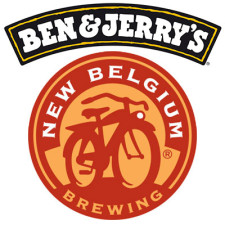 Fort Collins, CO – As Fellow B Corporations beholden to stakeholders including the earth, their communities and the environment, New Belgium Brewing and Ben & Jerry’s Ice Cream are excited to announce a partnership designed to please palates and raise awareness. Details at this time are preliminary, though New Belgium has developed a special release beer called Salted Caramel Brownie set to hit markets in the fall of 2015. The two like-mined businesses have long championed similar causes such as minimizing carbon pollution and supporting sustainable agriculture. This project will focus on environment awareness as well.

“Although our TTB filing for the beer is now public, specifics around the campaign are still in development,” said New Belgium Director of Sustainability, Jenn Vervier. “At this time I can confirm that Ben & Jerry’s and New Belgium are collaborating to raise awareness around issues we are passionate about, and that the results will be delicious.”

The Colorado-based craft brewer and famed ice cream maker are both registered Beneficial or “B Corporations”. B Corps are held to performance standards that are comprehensive and transparent, measuring a company’s impact on workers, suppliers, communities and the environment. Both organizations have been looking for ways to partner on a project that’s both tasty and meaningful.

“We’re big fans of New Belgium Brewery, their values, and their fun culture, and of course their beer” said Jay Curley, Senior Global Marketing Manager of Ben & Jerry’s. “We’re excited for the campaign we’ve developed together. When two B Corps collaborate our fans can expect something both delicious and impactful,” added Curley.

An announcement later this year will detail the focus of the campaign and the specifics around the partnership.

ABOUT BEN & JERRY’S
As an aspiring social justice company, Ben & Jerry’s believes in a greater calling than simply making a profit for selling its goods. The company produces a wide variety of super-premium ice cream, yogurt and sorbet using high-quality ingredients. Ben & Jerry’s incorporates its vision of Linked Prosperity into its business practices in a number of ways including a focus on values-led sourcing. In 2014 the company plans to complete its transition to using entirely non-GMO (genetically modified organisms) ingredients by source as well as to fully Fairtrade-certified ingredients wherever possible, which benefits farmers in developing countries. Ben and Jerry’s products are distributed in 35 countries in supermarkets, grocery stores, convenience stores, franchise Ben & Jerry’s Scoop Shops, restaurants and other venues. Ben & Jerry’s, a Vermont corporation and wholly-owned subsidiary of Unilever, operates its business on a three-part Mission Statement emphasizing product quality, economic reward and a commitment to the community. Ben & Jerry’s became a certified B Corp (Benefit Corporation) in 2012. The Ben & Jerry’s Foundation’s employee-led grant programs totaled $2.5MM in 2013 to support economic and social justice, environmental restoration, and peace through understanding. For the inside scoop on Ben & Jerry’s visit www.benjerry.com.