(Ft. Collins, Co) – New Belgium Brewing’s 2017 blend of Transatlantique Kriek is out now and it’s the first time the beer is 100% wood-aged. The sour is a mix of 50 percent New Belgium Foeder-aged Golden Sour and 50 percent Authentic Kriek Lambic from Brewery Oud Beersel in Belgium.

“This year’s beer is particularly iconic because it’s 100% wood aged,” said Andrew Emerton, New Belgium Specialty Brand Manager. “Because of our process with this beer, we actually had the incredible honor of having Transatlantique Kriek at this year’s Toer de Geuze in Belgium, the premier sour beer event in the world.”

“We showcased our beer alongside 12 other authentic lambic producers,” added Lauren Limbach, New Belgium’s Wood Cellar Director & Blender. “It was an incredible honor and a total dream come true!”

The kriek lambic process takes place in Belgium at a few select breweries including Oud Beersel, New Belgium’s collaborative producer. Authentic lambic is spontaneously fermented beer that is soured in oak barrels. Oud Beersel then matures the lambic on Polish cherries for months to produce the kriek, which is then sent from Belgium to New Belgium to blend with an oak-aged sour golden.

New Belgium has a rich history of brewing sour beers and this year marks its 14th year of Transatlantique Kriek. The beer’s flavor profile is spritzy, mouthwatering and fruity, along with tartness from the cherries. The 2017 Transatlantique Kriek is 6.5 percent ABV and is available in 22 oz. bottles and on draft. 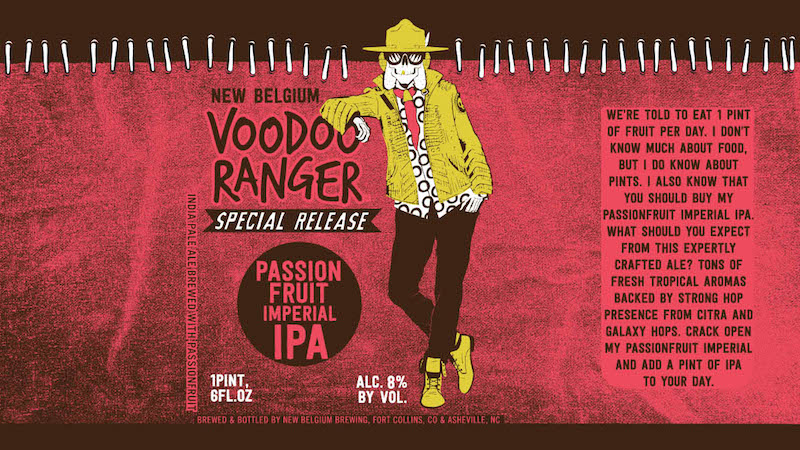 New Belgium Brewing also just released its latest addition to the Voodoo Ranger line, a specialty brew called Passionfruit Imperial IPA. Tropical aromas and passionfruit flavors are backed by a strong presence of Citra and Galaxy hops. The double IPA’s crisp and refreshing taste is perfect for the summer weather.

Passionfruit Imperial IPA is 8 percent ABV and is available in both 22 oz. bottles and on draft for a limited time only.

To find either of these beers, along with others from New Belgium, visit the libation locator at http://www.newbelgium.com/beer/locator.aspx or download New Belgium’s Beer Mode app.