(ATLANTA, GA) – Dust Bunny, the winner of the Best New Georgia IPA 2017 (Beer Guys Radio), is hopping back into the Monday Night Brewing lineup of beers. This refreshing, unfiltered IPA will be offered on draft and in six-pack cans starting Friday, August 10 with a launch in Monday Night’s West Midtown Taproom. 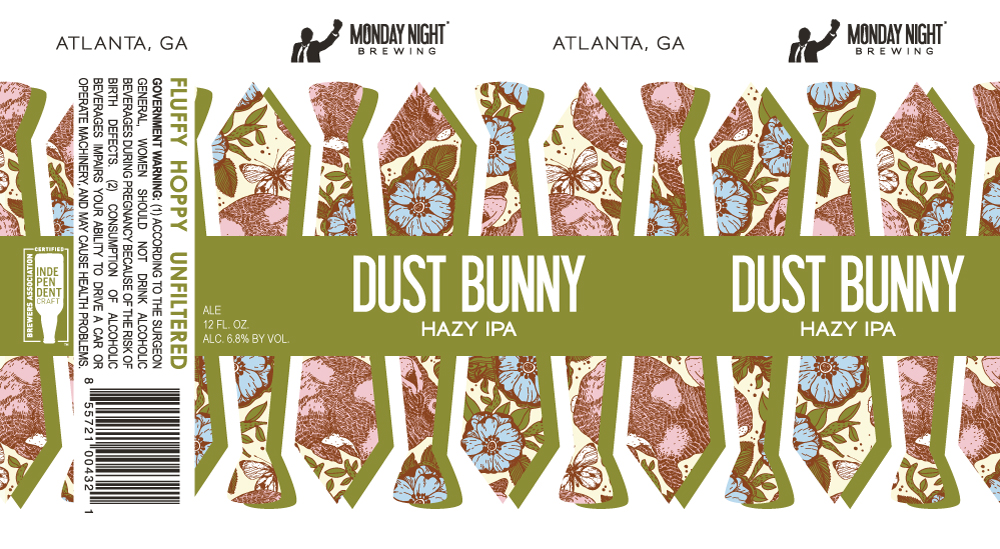 After an August 10 taproom launch, Dust Bunny will see distribution throughout Georgia, Alabama, and Tennessee beginning on Monday, August 20. This beer is packed with aromatics of orange and lemon, dripping with notes of honey. Its body is soft and bright, with hints of peach. Moderate bitterness and a juicy mouthfeel round out this IPA.

Head Brewer Peter Kiley says, “Our West Midtown location has been cranking out stellar IPAs since we opened the Hop Hut. Dust Bunny was just the beginning of that journey. We’re excited for more craft beer fans to see what we can do with hops.”

Named for its fuzzy, fluffy characteristics, Dust Bunny has been one of the most requested beers brewed by Monday Night. Its taproom launch on Friday, August 10 will coincide with the can release of another taproom favorite, Locals Only. While Dust Bunny will see wide distribution, Locals Only will be available exclusively in the West Midtown taproom, out of the Hop Hut, in limited quantities.

“This is the first time we’re launching two IPAs at the same time,” says co-founder and CMO Jonathan Baker. “We are really proud of the way both of these beers came out. Dust Bunny is soft, with hints of peach, while Locals Only is super juicy with loud tropical notes. It’s a fun juxtaposition of flavors within the same style of beer.”

If you would like samples to review or to interview Head Brewer Peter Kiley, please contact [email protected]

Based in Atlanta, Georgia, Monday Night Brewing grew out of a Bible study. Founded by Jonathan Baker, Joel Iverson and Jeff Heck, Monday Night Brewing exists to deepen human relationships over some of the best beer of country. Head Brewer Peter Kiley oversees barrel-aging and souring at their brand new facility, the Garage, in Atlanta’s Lee + White project on the southwest side of Atlanta. More details can be found here.