Ipswich, MA – In what has become a true American success story, the craft beer market again grew by double digits in 2007, leading all other segments in the beer category. The Brewers Association reports estimated sales by independent craft brewers up 12 percent by volume and 16 percent in dollars for 2007. Craft brewers share of the beer category is 3.8 percent of production and 5.9 percent of retail sales.

Locally, this trend was reflected in the results of Mercury Brewing Company which posted an increase of 37 percent in beer and soda sales for 2007. 2008 promises to be another great year for Mercury with first quarter sales up 26 percent.

“We’ve been very fortune during this time of exceptional craft beer sales,” said Rob Martin, President and owner of Mercury Brewing Company. “Through the hard work of a dedicated brewery staff we have been able to increase sale by 750 percent since I took ownership in 1999.” 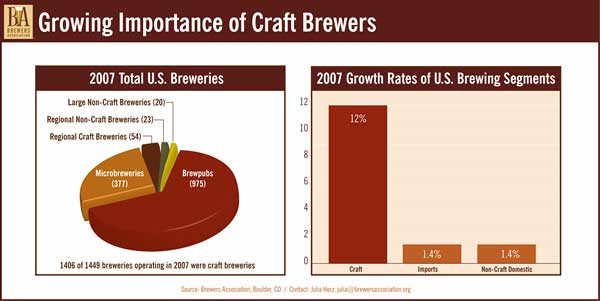 An American craft brewer is small, independent, and traditional.

Small: Annual production of beer less than 2 million barrels. Beer production is attributed to a brewer according to the rules of alternating proprietorships. Flavored malt beverages are not considered beer for purposes of this definition.

Independent: Less than 25% of the craft brewery is owned or controlled (or equivalent economic interest) by an alcoholic beverage industry member who is not themselves a craft brewer.

Traditional: A brewer who has either an all malt flagship (the beer which represents the greatest volume among that brewers brands) or has at least 50% of its volume in either all malt beers or in beers which use adjuncts to enhance rather than lighten flavor.