(Kihei, HI) – Maui Brewing Company is pleased to announce the limited release of Mosaic Mo’Betta Double India Pale Ale, available in cans for the first time. Originally brewed in December of 2015, this imperial IPA has become a favorite among Maui Brewing fans. 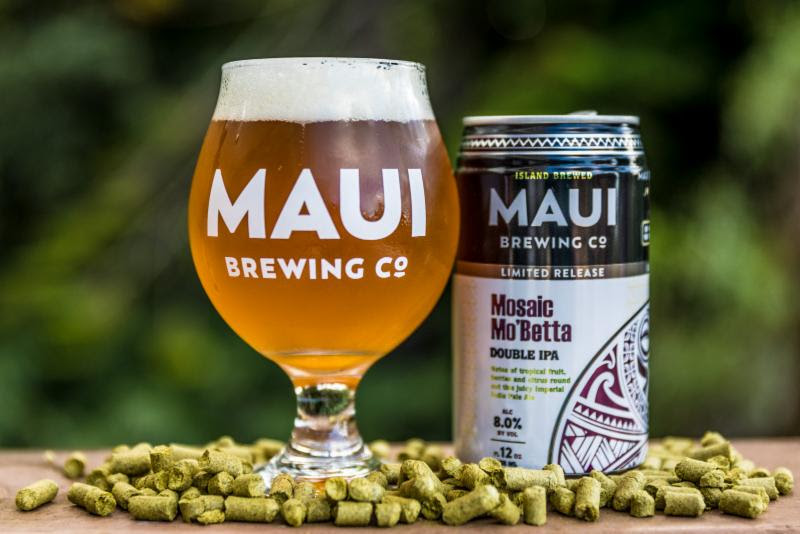 Brewing Supervisor Matt Ponichtera describes his experience, “It was through the trials of designing the dry hop for POG IPA that I fell in love with the flavors and aromatics of Mosaic hops. Despite these hops having great potential for the POG IPA, at the last minute I decided to remove it and create an entirely separate IPA in which Mosaic would be the featured hop. To me, it’s just one of those hops that has the ability to make any IPA ‘Mo’ Betta!'”

MBC brewed 500 barrels of Mosaic Mo’Betta which utilizes 2-Row, Munich, and Wheat malts with Simcoe and Mosaic hops. The result is a deep golden appearance, tropical citrus aroma, and notes of tropical fruit, berries, and citrus to round out the juicy flavor. Mosaic Mo’Betta, at 8.0% ABV and 75 IBUs, will be available in 4-pack cans and draft in Hawaii, with limited availability of draft (only) on the mainland.

The opportunity to enjoy Mosaic Mo’Betta DIPA begins this Friday, September 15th in all Maui Brewing Company locations: Kihei, Lahaina, and Waikiki. MBC will offer a special “Keep the Glass” commemorative can glass for customers to add to their flagship glassware collection which launched during the 2016 holiday season and are attainable online.

Maui Brewing Company is a fiercely local company and has remained steadfast
regarding local production. The MBC team are stewards of their communities and the ‘aina, and curators of the craft beer way of life. Their beers have been recognized worldwide for quality and innovation.