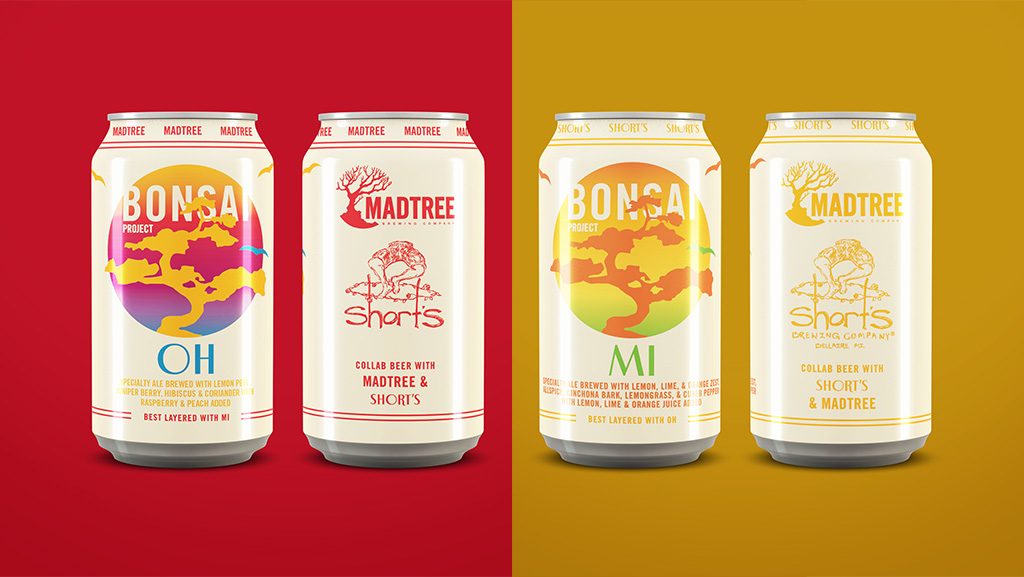 MadTree is brewing and canning, OH, a gin-inspired specialty ale with lemon peel, juniper berry, hibiscus, and coriander with raspberry and peach added. Short’s is brewing and canning, MI, a tonic-inspired specialty ale with lemon, lime, and orange zest, allspice, cinchona bark, lemongrass, and cubeb pepper with lemon, lime, and orange juice added. When layered together both are sure to make beer drinkers say, “oh my!”

Each six-pack will contain three cans of OH and three cans of MI in a carton-wrap package format. Best served layered, consumers can layer at home or get the full layering experience at MadTree and Short’s events at bars and restaurants across the Midwest. The breweries will provide each event location with a custom layering spoon to create the Bonsai Project on-site.

“When we decide to collaborate with another brewery, it’s because we have a genuine relationship with them and we inspire each other to create innovative beers” said Brady Duncan, MadTree co-founder. “Hanging out with Joe and the team from Short’s, with a few cocktails added, got us thinking about doing something different.”

“Everything about this project is rad. From concept to package design, all the way through recipe development and promotional brainstorming. I think it’s awesome to offer up two uniquely different beers in both color and flavor, that also complement each other. The layering element takes it to a whole new level adding a third flavor experience at the consumers discretion. I’m stoked to see this project come to fruition. It’s going to be a game changer.” said Short’s CEO and Creative Engineer, Joe Short.

Collaboration six-packs and draft will be distributed throughout Ohio and Indiana by Cavalier Distributing and across Michigan by Imperial beverage beginning on November 12, 2018.

About MadTree Brewing Company
Cincinnati’s MadTree Brewing made history when they opened in 2013 by becoming the first modern craft brewery to can its beer in Ohio. When it comes to brewing, they have carved their own path. They mix. They mash. They methodically bring quality beer to life, and have fun doing it. Demand from the growing community keeps MadTree motivated and moving. In return, they make nothing but the best beer. They are founded and continue to grow on the notion that beer builds community and community builds beer. MadTree distributes its beers throughout Ohio, Kentucky, and Middle and Eastern Tennessee.

About Short’s Brewing Company
Located in the heart of Downtown Bellaire, MI, Short’s Brewing Co. was established in 2004 by Joe Short. In 2009, Short’s began keg and bottle distribution in Michigan via their Elk Rapids Production Facility. Starcut Ciders is a division of Short’s Brewing Company born out of a desire to celebrate the bounty of Michigan orchards. The brewery is known widely for their flagship and experimental brews including Huma Lupa Licious and Soft Parade. Short’s prides themselves on producing fearlessly creative beers, handmade by people who care in Northern Michigan.