(CINCINNATI, OH) – MadTree Brewing is releasing their newest seasonal beer, Blood Orange PsycHOPathy, in cans after an overwhelming customer demand generated by a small draft release last fall. What began as a taproom experiment became a phenomenon with customers always asking for more. This spin on the extremely popular PsycHOPathy IPA adds a bold dose of real Blood Orange juice to impart a slightly bitter citrus kick. At 6.2% ABV and 72 IBU, it’s the perfect companion for spending Sundays with your friends and family. 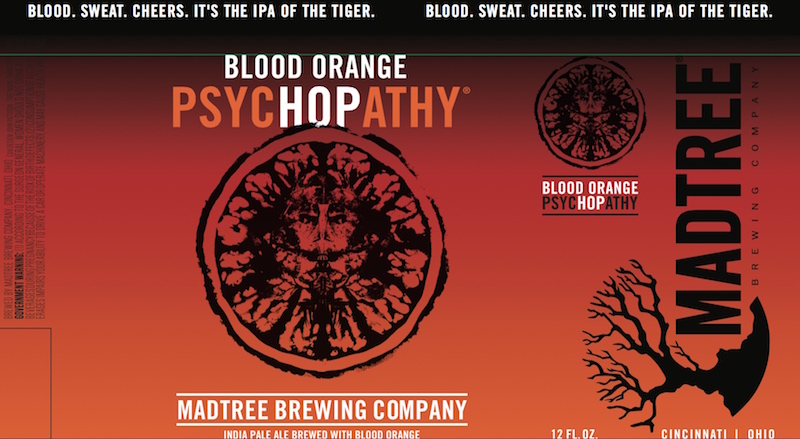 “We’re not the first to put fruit in an IPA, but customers have been helping us design this beer for the past year by providing their feedback on all the different batches,” said MadTree Brewing co-founder, Brady Duncan. “The tart and sweet character of the real Blood Orange juice complements the citrus, floral, and grassy hop flavors in PsycHOPathy. Plus, these are the some of the sexiest cans out there.”

Both the original PsycHOPathy and Blood Orange PsycHOPathy illustrations were created by Cincinnati artist, Margaret Weiner. MadTree exclusively uses local artists to design the artwork for all of their canned and bottled beers.

A Bengals tailgate and watch party supporting the Disabled American Veterans charity on Sunday, September 11 will kick-off the sale of cans beginning at 11 a.m. Fifty-percent of sales of Blood Orange PsycHOPathy cans, t-shirts, and posters sold that day will be donated to DAV in support of the DAV 5K at Sawyer Point on November 5. Catch-A-Fire Café will offer some special menu items along with their full menu all day.

There will be a limit of one case of cans per person. Can and draft distribution to restaurants, bars, and retailers will begin the week of September 12.

Cincinnati’s MadTree Brewing made history when they opened in 2013 by becoming the first modern craft brewery to can its beer in Ohio. They are currently constructing a new $18M brewery in Cincinnati’s Oakley neighborhood set to open Winter 2016/2017. MadTree is known for focusing more on great tasting beers rather than following traditional brewing style guidelines. Their award-winning beers are distributed throughout Cincinnati, Dayton, Columbus, Toledo, Athens and Northern Kentucky. For more information about the beers, brewery, and taproom, visit madtreebrewing.com or connect with them on Facebook, Twitter, Instagram, and Snapchat.

DAV empowers veterans to lead high-quality lives with respect and dignity. It is dedicated to a single purpose: fulfilling our promises to the men and women who served. DAV does this by ensuring that veterans and their families can access the full range of benefits available to them; fighting for the interests of America’s injured heroes on Capitol Hill; and educating the public about the great sacrifices and needs of veterans transitioning back to civilian life. DAV, a non-profit organization with 1.2 million members, was founded in 1920 and chartered by the U.S. Congress in 1932.