(San Marcos, CA) – The Lost Abbey announces Veritas 015 goes on sale February 6th. Similar to Veritas 013 sales last year, Veritas 015 sales be held online through Lost Abbey’s website. Rumor has it to be a 300 case release going on sale, so be fast on the keyboard. Cheers!

“Veritas 015, an American Sour with Apricots, Nectarines and Peaches will go on-sale Friday, February 6th at Noon PDT. 4 bottle limit per person at $41 a bottle plus tax. Pickup will be during 4 sessions happening March 7th and 8th at The Lost Abbey. ‪#‎Veritas015‬”

The link to the sale: lostabbey.com/shop 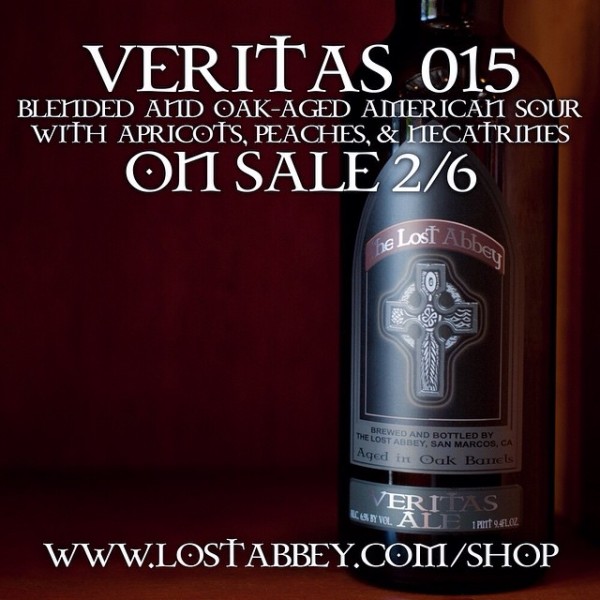 Founded in 2006, Port Brewing and The Lost Abbey produces an extensive line-up of continental and American- inspired ales and lagers. Under the direction of visionary brewmaster and co-founder Tomme Arthur, the brewer has garnered dozens of awards in its seven year history including the 2007 Great American Beer Festival Small Brewery of the Year and the 2008 world Beer Cup Champion Small Brewery. The company’s beers, many of which are aged in oak barrels for 12 months or longer, are universally recognized for their complexity, unique flavors and bold boundary-pushing styles.