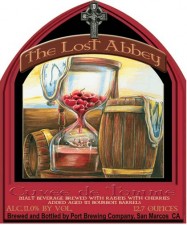 (San Marcos, CA) — First produced in 1999 when Tomme Arthur was Head Brewer at Pizza Port Solana Beach, The Lost Abbey’s 2014 Cuvee de Tomme release will have a different wrinkle; it will be released as a draft-only beer.

“We had a few packaging constraints near the end of this year so we just didn’t have the means to get Cuvee into bottles” said Tomme Arthur, Co-founder and Chief Operating Owner of The Lost Abbey. “But the good news is we’ll have more kegs and be able to spread the wealth to some territories that have never had it in years past.”

Cuvee de Tomme is a blended beer that starts with a base of Judgment Day, The Lost Abbey’s abbey quad brewed with raisins, and aged with Brettanomyces in bourbon, brandy and red wine barrels. Initial notes of tart cherries, acid from the Brett, which develops into a deep barrel character with hints of Vanilla, oak and tannins.

About Port Brewing / The Lost Abbey
Founded in 2006, Port Brewing and The Lost Abbey produce an extensive line-up of continental and American- inspired ales and lagers. Under the direction of visionary brewmaster and co-founder Tomme Arthur, the brewery has garnered dozens of awards in its seven-year history including the 2007 Great American Beer Festival Small Brewery of the Year, The 2008 world Beer Cup Champion Small Brewery and the 2013 Champion Brewery at the San Diego International Beer Festival. The company’s beers, many of which are aged in oak barrels for 12 months or longer, are universally recognized for their complexity, unique flavors and bold boundary-pushing styles. For more information, contact Port Brewing / The Lost Abbey at 155 Mata Way, Suite 104, San Marcos, CA 92069, telephone (800) 918-6816, and on the web at www.LostAbbey.com

New Belgium Adds 50% More Onsite Solar Capacity Have Cascade, Stone Enjoy After and The Bruery Mash Shipped to Your Door