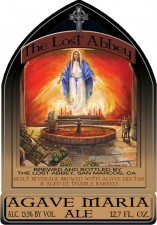 San Marcos, CA, — Inspired by the reverence the Jimadors in the Agave fields of Jalisco Mexico have for a local icon with divine associations, The Lost Abbey is proud to announce its newest addition to its seasonal barrel-aged portfolio, Agave Maria Ale.

Continuing The Lost Abbey’s crusade to expand and experiment with new beers and barrel-aging techniques, Agave Maria’s base is a new strong-ale brewed with Agave nectar and aged in both Anejo and Reposado barrels for a minimum of 10 months, the first tequila barreled beer to hit The Lost Abbey’s entire distribution network.

“When I first moved from the East coast to The Lost Abbey, Tomme and I talked about prospect of getting tequila barrels and it was so exciting when that happened!” said Gwen Conley, Director of QA and Production. “An incredibly smooth yet intriguingly complex beer, it’s a perfect representation of the terroir of the Agave Fields.”

Agave Maria has hints of black pepper, sweet sugar, oatmeal, and oak with an earthy, bitter smoked chocolate on the finish. The base beer, a new Agave strong ale, was created specifically to pair with the spiciness of the Tequila, adding a sweet honey-like quality to the beer.

The new artwork for Agave Maria was created by The Lost Abbey’s resident artist, Sean Dominguez (Sean has created all of The Lost Abbey labels) and depicts the Agave Maria mural, blessing Agave piñas as they pass through her outstretched arms, whilst candles illuminate her image, never being allowed to extinguish.

Agave Maria will be available throughout the Lost Abbey distribution network beginning in April in limited draft and 375 ml cork-finished bottles with an ABV of 13.5%.  Expected to be an annual release, look for Agave Maria to be released every spring.

About Port Brewing / The Lost Abbey
Founded in 2006, Port Brewing and The Lost Abbey produce an extensive line-up of continental and American- inspired ales and lagers. Under the direction of visionary brewmaster and co-founder Tomme Arthur, the brewery has garnered dozens of awards in its seven-year history including the 2007 Great American Beer Festival Small Brewery of the Year, The 2008 world Beer Cup Champion Small Brewery and the 2013 Champion Brewery at the San Diego International Beer Festival. The company’s beers, many of which are aged in oak barrels for 12 months or longer, are universally recognized for their complexity, unique flavors and bold boundary-pushing styles. For more information, contact Port Brewing / The Lost Abbey at 155 Mata Way, Suite 104, San Marcos, CA 92069, telephone (800) 918-6816, and on the web at www.LostAbbey.com