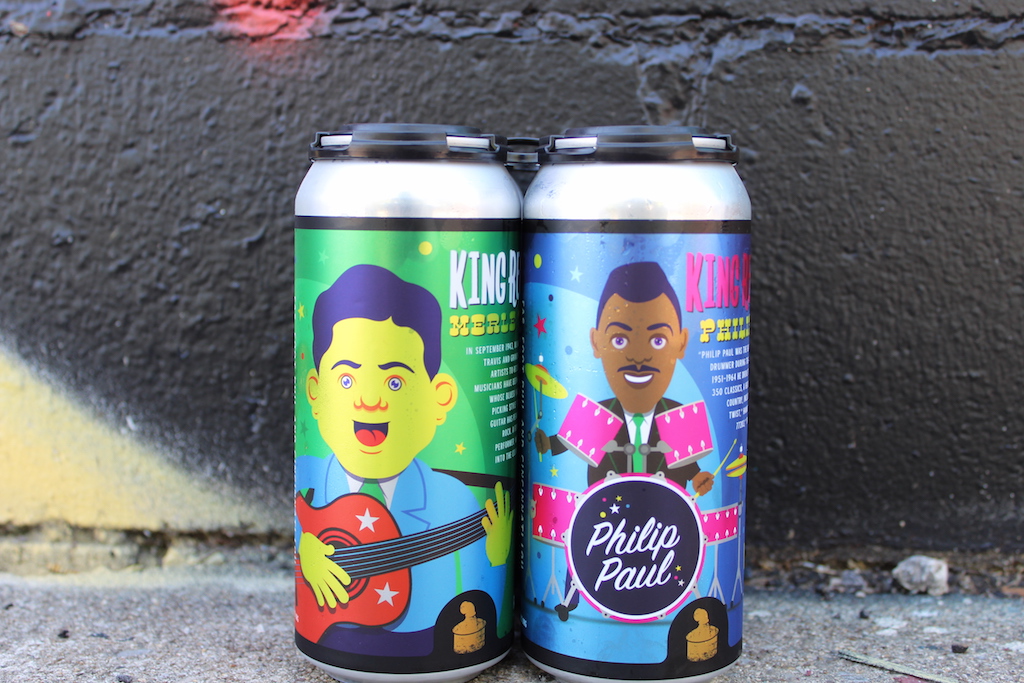 Come join the party starting at 10am at Listermann’s, located just blocks from the site of King Records headquarters on Saturday June 2nd. As an homage to the days when King Records would release a vinyl 45 record with two hit songs on each side, this month’s beer will share two names.

The beer being released is called “Fas Foot Phil’ / “Cincinnati Lou” which is a New England IPA brewed with El Dorado and Simcoe hops. Easy-going and drinkable, with bright bursts of intense candied fruits like mango, pear, and cherry, this NE IPA will cool down your “fever”, and help you find your groove with the incredible music that came from King Records.

Listermann Brewing Company is generously donating 10% of the beer proceeds to King Studios.
“It’s been a fun time paying homage to early rock and roll, country and R&B artists that came out of Cincinnati, and inevitably, changed the course of music history. We all know Cincinnati is a special city, and these musical legends make that quite obvious, and we are proud to be connected with this effort to re-vitalize King Records, so that we have a physical location to celebrate these legends that help make Cincinnati great!” said Jared Lewinski, head brewer at Listermann Brewing Company.

We Have Become Vikings have been commissioned to design a portrait of each musician that will appear on the can along with a short artist bio written by a music historian. We Have Become Vikings were the creators of King City, the art installation that celebrated Syd Nathan’s company during the wildly popular Blink Festival in October 2017 in downtown Cincinnati.

Start your collection of this beer series this summer and celebrate Cincinnati music history!
Legendary drummer Philip Paul was a studio drummer for King Records during its most productive years from 1952 to 1964. He earned the nickname “Fas Foot Phil” due to his incredible speed on the bass drum. As the house drummer, he was “The Beat” of King Records. Phil played on over 350 recordings, with some of the great R & B artists including Hank Ballard, Little Willie John, Tiny Bradshaw, and Freddie King as well as country artists like Bonnie Lou, Cowboy Copas and Hawkshaw Hawkins. Born and raised in Harlem, he began to play drums at age 9 years old. While in New York, he played with such jazz greats as Sonny Stitt, Bud Powell and Diz. An invitation to join Tiny Bradshaw’s band led him to move to Cincinnati in 1952. While at King he played on such important recording as “Fever” “The Twist” and “Hideaway.” Philip Paul was inducted into the Cincinnati Jazz Hall of Fame in 2016. A longtime Evanston resident, Philip Paul continues to play every week at age 92 in his adopted hometown of Cincinnati.

Few musicians have been as influential as Merle Travis whose blues/jazz tinged country finger picking style (called Travis picking) has permeated country, folk and rock. With Grandpa Jones, he recorded the first songs for King in September 1943. Born in Rosewood, Kentucky, Travis, at 18 years old, became a performer for six years for the Boone County Jamboree radio show on WLW in Cincinnati in 1938. Broadcasted nationally, his playing was heard by and inspired a teenaged Chet Atkins, growing up in Georgia. Relocating to Los Angeles in 1944, he worked as a talent scout for King Records before having his first hits with “Cincinnati Lou” and “No Vacancy.” on Capitol Records. A formidable songwriter and performer, he starred on TV and in movies before being inducted in to the Country Hall of Fame in 1977.

About King Studios
King Studios is a non-profit organization whose goal is to expose and energize the legacy of Cincinnati’s historic King Records and to share its rich history in contemporary ways that engage the community and the world in the legacy of King. For more information on King Studios, visit www.kingstudios.org/