(Dallas, TX) – Lion’s Share IV, the fourth release of Lakewood Brewing Company’s annual anniversary brew, will launch throughout the North Texas region beginning Monday, August 8th with more markets around the state in the following weeks. LBC proudly toasts each anniversary with their Lion’s Share, a unique brew that changes from year to year. 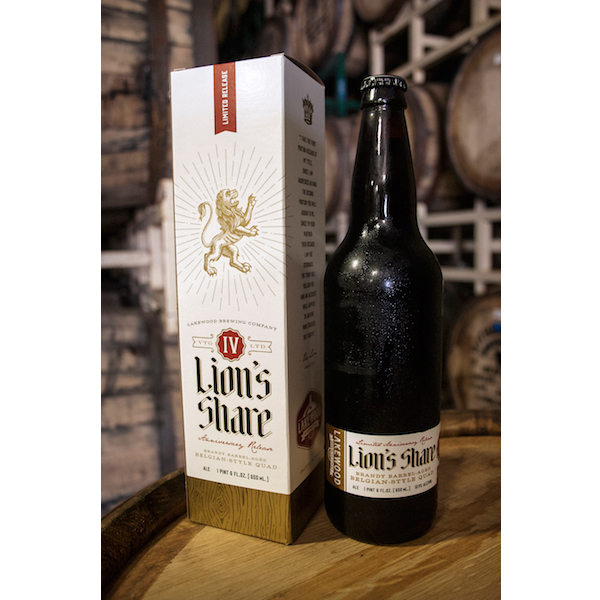 “Since our start in 2012 we knew we wanted to celebrate our 4th anniversary with a Belgian Quad,” stated Wim Bens, Founder & President of Lakewood Brewing Company. “We went BIG for this year’s vintage, crafting one of the highest ABV beers we’ve ever made. I’m excited to share it with you and look forward as we say ‘Schol’ to the next four years.”

Lakewood Brewing is paying homage to its Trappist brethren in Belgium with their own interpretation of the style; this robust beer is brewed with rich caramel and roasted malts, Belgian candi sugar, and LBC’s house Belgian yeast.

After months of resting and maturing in freshly emptied brandy barrels, it displays an array of flavors while maintaining a nice balance throughout. The brandy’s unique characteristics perfectly complement this bold beer, with notes of dried cherries, figs, raisins, and toffee intermingling with a subtle warmth in the finish.

Lion’s Shares I, II and III were available on draft only, making this year’s bottled version extra special. It will be available for a very limited time both on draft and in individually boxed 22oz bottles at select craft retail locations beginning this August.

Lakewood Brewing Company produces internationally inspired, locally crafted beers. Its diverse varieties include year-round, seasonal, and small-batch brews including the Legendary and Seduction Series. Lakewood has been recognized nationally in major beer competitions and has brought home awards for many of their beers, notably: Placing second overall in the 2015 U.S. Open Beer Championship with six medals, inc. a gold for the Saint Dymphna; winning three medals in the San Diego and Los Angeles International Beer Competitions, inc. a gold medal for its Bourbon Barrel Temptress; and earning a pair of Best in Region nods in the Best of Rockies/Southwest Region in the U.S. Beer Tasting Championship for Hopochondria and Zomer Pils. Lakewood beers are available throughout the DFW Metroplex, Austin and Central Texas, Corpus Christi, Abilene, Amarillo, Wichita Falls, Bryan/College Station and East Texas area in discerning bars, restaurants, and select retailers; perfect “for whichever neighborhood you call home”. For locations and more information, please