(DALLAS,TX) – Lakewood Brewing Company is excited to announce it is adding cans to its production portfolio with three select Lakewood beers. Beginning in April 2015, Lakewood Lager, Rock Ryder and a new session IPA will begin appearing in cans in retail stores across DFW for the first time. 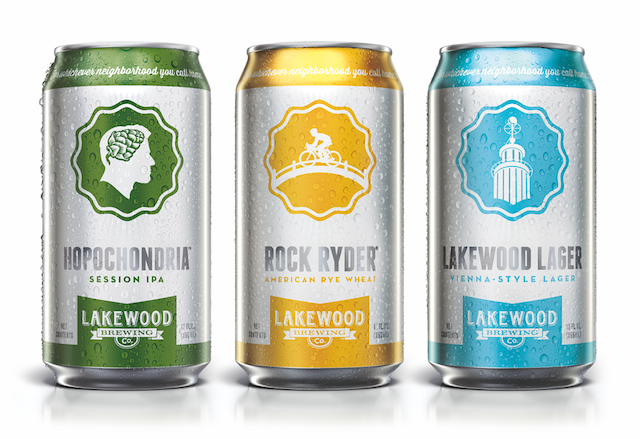 “Canning our beers is definitely something we’ve talked about doing for a while, and we are very happy to be able to provide that packaging option to our fans,” said Wim Bens, founder and president of Lakewood Brewing Company. “Our goal is to make sure our beers are available for any occasion and cans are an easily accessible and eco-friendly option, especially for outdoor events and activities.”

“We also thought this would be a great way to bring a new year-round offering to market – a lower alcohol IPA for hop lovers. It’s called Hopochondria, and the name of the beer, which is an obvious playful take on the word ‘hypochondria,’ is a nod to craft beer ‘hop heads’ or someone having an obsessive preoccupancy with hops. Our sessionable IPA will afflict hop lovers across North Texas starting in early April in six-packs and draft.”

Also in early April, Rock Ryder – American Rye Wheat will make its debut in six-pack cans, replacing bottles. “Considering this beer was made for outdoor activities from bike rides around White Rock to hanging out by the pool, it just made so much sense to feature it in a can,” said Bens. Following in May, Lakewood Lager will be available in can 12-packs, as well as continuing to be available in bottle six and 12-packs.

Canning is a huge milestone for Lakewood, following the 14,000 sq. foot expansion of the Garland-based brewery. The expansion includes a brand new taproom, opening in March for patrons to enjoy LBC’s beers. For the canning process, Lakewood will utilize Crown cans and equipment from Wild Goose Engineering, PakTech, Filtec and Ska Fabrication.

Lakewood Brewing Company produces internationally inspired, locally crafted beers. Its diverse varieties include year-round, seasonal, and small-batch brews including the Legendary and Seduction Series. Lakewood has been recognized nationally in major beer competitions and has brought home awards for many of their beers including: a Gold for their spring seasonal, Till & Toil at the 2014 San Diego International Beer Festival, two Golds and one Bronze at the 2014 US Open Beer Championship recognizing Rock Ryder, Antigoon’s Revenge and La Dame du Lac. Lakewood was also named a National Grand Champion for Goatman at the US Beer Tasting Championship. Lakewood beers are available throughout the Dallas-Fort Worth area in discerning bars, restaurants, and select retailers; perfect for whichever neighborhood you call home. For locations and more information, please visit lakewoodbrewing.com.