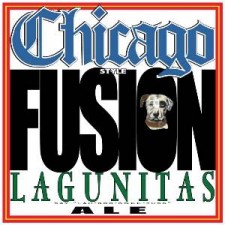 Lagunitas to Open New Brewhouse in Chicago in 2013

Petaluma, CA April 10, 2012 – The Lagunitas Brewing Company of Petaluma CA is moving forward with the construction of a second brewing facility in the crossroads of the US; Chicago Illinois. Carl Sandburg’s ‘City of Big Shoulders’ will be home to a new ROLEC-built 250 barrel kettle and 200,000 barrels of initial capacity. The brewery will be operating by the 4th quarter of 2013, and will occupy 150,420 square feet on the grounds of the CineSpace Movie Soundstage complex at 15th Street and Rockwell in Chicago’s Douglas Park neighborhood.

According to Lagunitas founder and CEO, Tony Magee, the idea got very real in the last 2 months. A few days spent with a calculator and a couple more visiting sites around the city crystalized the plan. “I was born and raised in Chicago so the siting questions were easy to figure out. But the real driver behind it all was two-fold; first, I realized that there was about 4 ounces of diesel in every 22oz bottle of our beer when enjoyed in Chicago, even more if you’re in NYC. Secondly, the future of Craft Beer is, we believe, local and we sure want to be a part of the future so the decision was easy. One of the best things about craft brewing is being close to the people who are digging it.”

Lagunitas is just finishing up a major expansion of its Petaluma home where it built a new brewhouse that will eventually enable it to brew more than four times what it brewed in 2011. The Petaluma brewery only has fermentation capacity to meet its needs through 2013. By building a second brewery in Chicago, Lagunitas will be adding that needed future capacity closer to where it will be enjoyed. According to Magee, “By the time Lagunitas Chicago is ready to mash in we will move about 140,000 barrels of production there. All the left coast and western states beer will still be brewed in Petaluma and life at the Petaluma brewery will be pretty calm, for a change, for a while…!”.