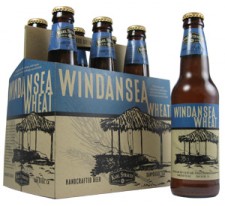 San Diego, CA – After years of pent up demand from craft beer fans, Karl Strauss Brewing Company is pleased to announce Windansea Wheat in bottles for the first time. Until now, the company was not able to bottle the beer despite its popularity because there simply wasn’t enough room in the brewery. With the recent brewery expansion and addition of several new 240-barrel fermentation tanks, there is now enough capacity to brew this authentic Bavarian hefeweizen year-round in 12oz bottles.

With the rise in popularity of wheat beers—now the fourth most popular style in California according to the Brewers Association—Karl Strauss is proud to share its version of the style across the state. Windansea Wheat is an award-winning hefeweizen brewed with 50% white malted wheat and just enough Noble Tettnanger hops to balance the sweetness. Unlike watered down American wheat beers, Windansea Wheat requires no lemon. A centuries-old weissbier yeast strain creates a complex and refreshing flavor profile of sweet banana, spicy clove, and fragrant vanilla. In fact, a squeeze of citrus would only muddle the delicate balance of flavors. The effervescent beer pours a bright gold color and is left intentionally unfiltered in accordance with German tradition and to preserve the distinctive flavor profile.

“Windansea is one of my favorite beers because it’s got a ton of flavor on its own,” says Paul Segura, Karl Strauss Brewmaster. “It’s like banana bread in a bottle.” Windansea Wheat will be available in bottles and on draft beginning June 2012 at select retailers across California. For more information on this award-winning beer, visit www.karlstrauss.com.

Tagline: A Bavarian-style Hefeweizen with banana and clove flavors and a refreshingly smooth finish.

Packaging: There are wheat beers that need dressing up, and there are those that don’t. Windansea Wheat is the latter. We brew our Hefeweizen true to the Bavarian style, using 50% malted wheat and Noble Tettnanger hops. A centuries old strain of German weissbier yeast lends its trademark banana and clove flavors that linger through a refreshingly smooth finish. Save the citrus wedge for a beer in need, you’ll thank us.

Bottle: The Shack at Windansea looks out over SoCal’s most legendary surf spot – a place where locals have gathered to hangout and surf for decades. The classic reef break produces head-high sets, making it both coveted and closely guarded by some of the world’s best. To put things plainly, paddling out is a privilege earned. Boogie-boarders need not apply.

About Karl Strauss Brewing Company
Since 1989, Karl Strauss Brewing Company has pioneered the local beer scene in San Diego. 23 years later, the company continues to brew an innovative line-up of award-winning beers ranging from longtime favorites like Red Trolley Ale to new releases like Wreck Alley Imperial Stout. In 2011, the company brewed 40,000 barrels and ranked #44 on the list of the country’s top craft breweries. To keep up with double-digit sales growth, the company is adding capacity to its brewery, expanding distribution throughout California, opening a new brewery restaurant, and breaking ground on an extensive brewery renovation.  www.karlstrauss.com – @Karl_Strauss – Facebook