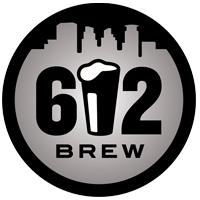 Minneapolis, MN — 6.12.12 — Who isn’t happy for more news about great Twin Cities beers? And now, a new contender is edging closer to launch of the first brewery and taproom worthy of the classic area code — 612Brew Minneapolis.

On this auspicious date, 6.12.12, 612Brew announces that it has signed a lease at the corner of Central and Broadway in Northeast Minneapolis. The brewery plans to open its taproom and have growlers available by late fall; and be liquor-store-ready within a year.

612Brew produces high-quality beers to satisfy both the craft beer and weekend drinker. Headed by four friends who got their start with homebrewing — Adit Kalra, Robert Kasak, Ryan Libby and Jamey Rossbach — 612Brew will produce exceptional beers with character and distinction. The brewery’s philosophy is simple: These guys make the beers they love to drink.

612Brew will launch with two beers: “SIX,” a sessionable American pale ale; and “Rated R,” a spicy and hoppy Rye IPA. The label will also introduce a summer seasonal beer, a tribute to Gilligan’s Island: the “Mary Ann” — a German-style lager featuring (wait for it) freshly grated ginger. There will be taproom and growler-only beers, such as “Zero Hour,” an American black ale, available to patrons who visit the brewery. “It is a way for us to experiment and see what people enjoy,” says Robert Kasak, beer drinker and co-founder, 612Brew. Some seasonal beers will be available year-round at the taproom.

“There has been a recent craft beer trend of ‘imperialized’ or ‘aged’ beers with huge body — and high alcohol content,” says Adit Kalra, president, 612Brew. “612Brew offers an alternative, with beers that fall more into the ‘sessionable’ category — with moderate- to low-alcohol content. That means you can drink a few and not feel over-served.”

“At 612Brew, we want to make the best beer you’ve never had,” says Ryan Libby, marketing director and co-founder, 612Brew. “We’re proud to be a part of the craft beer scene in Minnesota. States like California, Oregon, Washington and Colorado support hundreds of small and independent breweries. We’re excited that Minnesota is growing into a formidable beer state as well, and we look forward to adding the ‘Brew District’ distinction to Northeast Minneapolis, just as it is the Arts District.”

The company also plans to take advantage of a recent law change and include a menu of Indian street food in the taproom. The plan is to provide customers not only with great beer but also great food options as well. 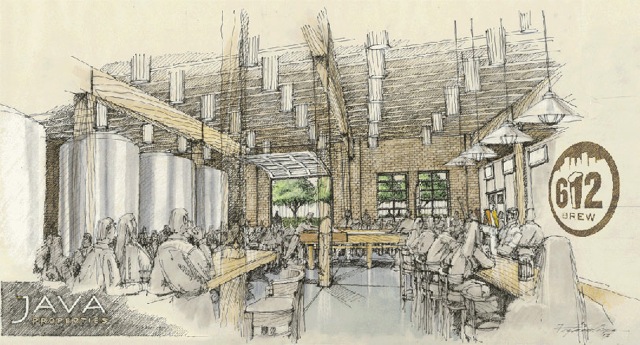 612Brew will be located at 945 Broadway St., the anchor tenant in the historic building The Broadway. This landmark building — recently purchased by Peter Remes, who restored the Van Buren building in Northeast and the Icehouse building in South Minneapolis — features exposed brick and timber along with polished concrete floors, an outdoor patio and a rain garden, creating a perfect atmosphere for the brewery. The Broadway, represented by Mark Krogh of Java Properties, is currently undergoing a full restoration.

While the guys have never owned a brewery, Kalra’s family background in restaurant and hospitality, along with Rossbach’s experience behind the bar at one of Uptown’s most high-profile restaurants, Libby’s creative and marketing background and Kasak’s inability to make donuts has created a dynamic group of owners poised to launch an extraordinary line-up of beers. 612Brew has worked with local equipment supplier Tom Ohlin of Minnetonka Brewing and Equipment to customize a brewhouse to fit the exact specifications of architect Scott Nelson of DJR Architecture, both of whom have done previous work with other local breweries. 612Brew worked with City Council member Kevin Reich, along with Minneapolis City Zoning and Planning departments, to find the ideal brewery location.

They are also proud to have raised the entire capital for the brewery on their own, taking on no private investors. This allowed 612Brew to secure a loan through the SBA and take advantage of the Minneapolis CPED program. “We all worked hard to save our money and put it in this business,” says Kalra. “It will make us work even harder to become successful.” In addition, a portion of the proceeds from 612Brew’s sales will be directed to local charities and community organizations.

612Brew is a small, independent brewery, building its roots in the Northeast Park neighborhood of Minneapolis. 612Brew plans to open its new taproom and production brewery at 945 Broadway S NE in late fall 2012. www.612brew.com – @612Brew – Facebook