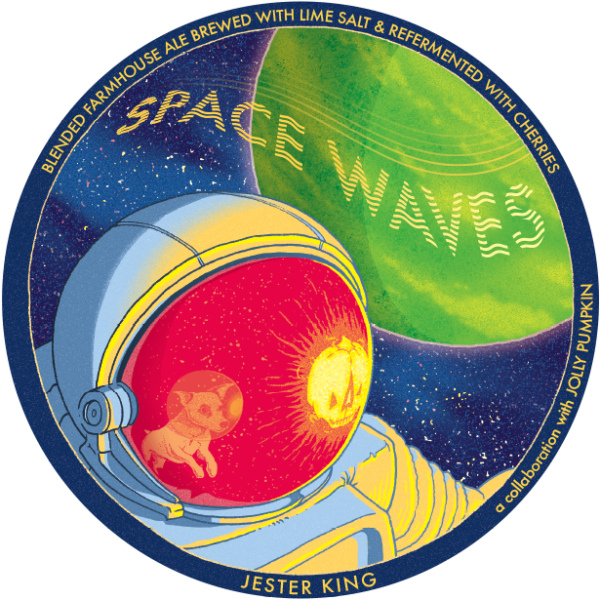 It’s no exaggeration to say that brewing with Jolly Pumpkin and Ron Jeffries was a dream come true and a significant milestone for Jester King. Even appearing in the same sentence as Jolly Pumpkin, let alone collaborating with them, is a surreal experience for which we are extremely grateful. I’m not shy at all to say that Jolly Pumpkin is Jester King’s greatest influence.

About ten years ago, I had my first beer from Jolly Pumpkin, and my life was changed from that point on. I had no idea what beer could be prior to experiencing it. It was like I tried something from a different planet. Not long afterward, I began experimenting with mixed culture fermentation as a homebrewer, trying to make something at least 1/100th as good as Jolly Pumpkin. I listened to Ron Jeffries’ interviews on The Brewing Network over and over again trying to decipher the imaginative nature of his philosophy and approach. Bam Bière and Calabaza Blanca became pinnacles for me. The ethereal nature of the beer, coupled with its reversion from modern, industrial brewing process, elevated it to magical status in my mind. As I sat in an office cube years ago, I’d occupy my time staring at the whimsical label art and allowing my mind to be transported to far away places inhabited by swashbuckling cats and treasure chests filled with golden elixir. As I hope you can tell, Jolly Pumpkin is really personal and important to me, and has occupied a significant portion of my life.

As time progressed, every opportunity to be in anyway connected to Jolly Pumpkin has been a milestone for Jester King. For instance, getting advice from Ron Jeffries about barrel selection, pouring Luciérnaga and Oro de Calabaza at our first ever Funk n’ Sour Fest, having Jolly Pumpkin come to Texas, and most recently collaborating with Jolly Pumpkin are all major events for us. People have asked me before why Jester King has never made a beer with Jolly Pumpkin, and the honest answer is that I was too afraid to ask. Well, it ended up working out, and now we have. I couldn’t be happier about it.

Space Waves is an ode to the pioneering nature of Jolly Pumpkin, its ethereal approach to brewing, and its founder Ron Jeffries. I think the label art for the beer by Josh Cockrell captures this sentiment. Our own “Captain Spooky” — Garrett Crowell — helped create the recipe. We took some of Ron Jeffries’ favorite flavors – bitter and salty — and combined them with the character we get from refermented Michigan cherries in our Montmorency vs. Balaton.

Space Waves was brewed at Jester King on April 14th, 2016 with well water, locally malted barley from Blacklands Malt, raw Texas wheat, hops, and lime salt. We fermented it in stainless steel with our mixed culture of brewers yeast, native yeast, and native bacteria. A relatively large dose of hops in the boil was intended to keep the bacteria in our mixed culture at bay, at least for a little while! We then blended it with Montmorency vs. Balaton, our barrel aged sour beer refermented with cherries at a ratio of about twelve to one (farmhouse ale to MvB). We packaged it on May 31st, 2016, then let the blend naturally referment in bottles, kegs and casks for another two months prior to release.

At the time of packaging, Space Waves was 5.6 percent alcohol by volume, 42 IBU, 4.3 pH, and had a specific gravity of 1.002 (0.5 degrees Plato). It will be released at our tasting room at 4pm on Friday, August 5th, 2016. It will be available by the glass, as well as at bottles to go (750ml/$14) with a limit of four per customer per day. About 3,000 bottles are available. Aside from special events and the portion of the batch we send to Jolly Pumpkin, we don’t anticipate Space Waves seeing distribution.

We really hope you enjoy this beer, which was very special for us to make, and I believe represents a major milestone for our brewery.