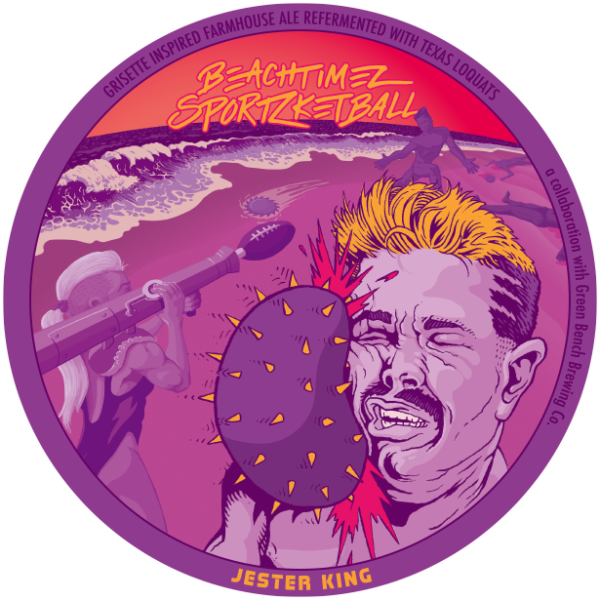 Green Bench, in my opinion, is one of the best makers in the world of Grisette-inspired beer. According to Phil Markowski’s Farmhouse Ales, Grisette was a low alcohol, dry, and refreshing style of beer that originated in the late 1,800’s along the modern day Franco-Belgian border to serve a growing population of stone and coal miners. I first tasted Green Bench’s Grisette last summer, and instantly became a huge fan of their interpretation of the style. We sought to achieve the wonderful, starchy, grainy malt complexity of their Grisette, along with its quenching, lactic sourness. Beachtimez Sportzketball can be considered as an ode to Green Bench Les Grisettes, but with the local touch of Texas loquats. Loquats, by the way, hang from the branches of a lot of trees around town during the spring in Austin. We considered a nighttime guerilla raid to get them, but fortunately some local friends and Jester King employees helped us out!
The artwork for Beachtimez Sportzketball, created by our in-house artist Josh Cockrell, was inspired by spending an afternoon at the beach in Saint Petersburg, Florida with Khris, Dan, and Kristin of Green Bench playing frisbee andtackle touch football. The photography above is by Tyler Malone of The Second Shooter.

Beachtimez Sportzketball was brewed on March 24, 2016 with Hill Country well water, malted barley, malted wheat, raw wheat, and hops. It was fermented in stainless steel with our mixed culture of brewers yeast, and native yeast and bacteria harvested from the land and air around our brewery. It was then refermented in stainless steel with loquats grown here in central Texas. It was then packaged on April 26, 2016 and 100% naturally conditioned in bottles, kegs, and casks. Around the time of packaging, Beachtimez Sportzketball was 4.5% alcohol by volume, 26IBU, 3.6 pH, and had a specific gravity of 1.000 (0 degrees Plato).

Beachtimez Sportzketball will go on sale at our tasting room at 4pm onFriday, June 24th. It will be available by the glass, as well as to go in 750ml bottles ($14/bottle). There will be no bottle limit, at least for the first weekend of sale. Approximately 3,000 bottles are available. At this point, we don’t see Beachtimez Sportzketball being available outside our tasting room aside from special events.