(Austin, TX) – We’re excited to release a special spontaneous blend from De Garde Brewing and Jester King this weekend at our tasting room! The blend is called “No Spiders”, and it was created in the spring of 2017 when Trevor Rogers of De Garde came to visit us. Trevor brought some of his 100% spontaneously fermented beer, and we blended it with two 225L barrels of our spontaneous beer from our 2016 coolship season. The barrels were selected by Trevor and our Head Brewer Averie Swanson. 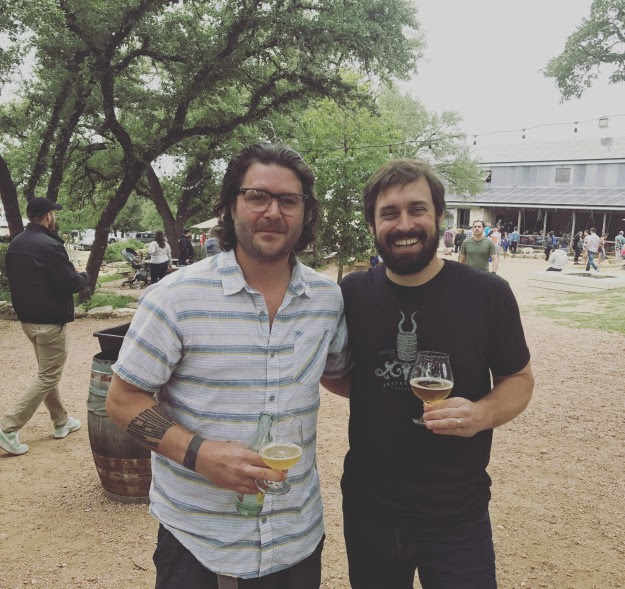 We chose to make the blend and serve it still without refermentation in the serving vessel! Drinking beer still is something we enjoy, especially in the context barrel aged sour beer. We’re excited to release still beer in our tasting room, and it’s something we plan to do more of in the future. There’s a stigma against drinking still beer that you don’t see in the wine world for instance. While refermentation in the serving vessel is something we love and will always do, we’d like to do what we can to make room for still beer in our community/industry. A lot of “flaws” in beer — such as sour, funky, light struck, corked, oxidized, or flat — are qualities that we enjoy in the right context. So we’d like to push back a little bit on the notion that beer must be effervescent.

No Spiders is 4.9% alcohol by volume, 41 IBU, 3.5 pH, and has a finishing gravity of 1.002 (0.5 Plato). It was packaged exclusively in kegs, so it is a draft only beer. It will be served at Jester King starting this weekend, and eventually at De Garde’s tasting room in Tillamook, Oregon. We have about 350 liters of No Spiders to pour at our tasting room.