(East Lansing/Kalamazoo MI) – There are a lot of natural matches when it comes to pairing coffee, from food options like bagels & donuts to experiential matches like a sunrise or crisp winter morning. So, it is with mutual enthusiasm that BIGGBY COFFEE and Arcadia Brewing Company have come together to pair beer and coffee in a new collaboration: Morning Nightcap, a rich and creamy coffee porter brewed with BIGGBY COFFEE Papua New Guinea. 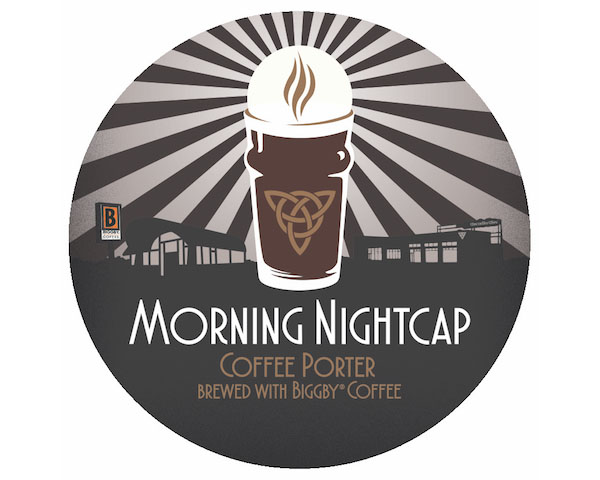 BIGGBY® COFFEE and Arcadia’s partnership sparked from an idea out in the field. “We had originally gotten the idea mentioned to us by one of our Owner/Operators (Kyle Kinney) on the west side of the state” says BIGGBY® COFFEE Co-President/CEO Michael McFall. “It wasn’t until we started really talking with Arcadia that we realized how amazing this opportunity truly was and when we decided to move forward.” Kinney, who owns several stores in the Kalamazoo area, knew that with the BIGGBY® COFFEE Annual Franchise Meeting coming to his city this past August, there was an opportunity “brewing.” “Knowing how big of a fan Tim (Suprise) was of Biggby Coffee this idea just made sense. I love the fact that two well known and loved craft industry companies have combined forces to produce something absolutely delicious!” says Kinney. Along with the partnership, Arcadia also will have a presence in Lansing with the opening of the Arcadia Ales & Smokehouse later this year.

Arcadia Brewing Company is excited to partner with Michigan-made company BIGGBY® COFFEE that has as much enthusiasm for their craft as Arcadia does for their beers. “The artisanal fabric of craft beer and coffee is woven by committed and community oriented companies, and this Arcadia/BIGGBY® collaboration truly reflects a dedication to quality, innovation, and experience.” Timothy Suprise (Founder/CEO).

Arcadia Brewing Company has been brewing Morning Nightcap coffee porter for three years now. Each previous brew was only available on draft, allowing each batch to be fine-tuned as the brewers worked to find the right blend of delicious coffee to pair with an equally enjoyable porter. The new partnership facilitated the opportunity for BIGGBY® COFFEE to create a brand-new bean blend. After testing a variety of existing blends in small pilot beer batches and researching several new blend options the winning coffee brew, Papua New Guinea, came out on top.

BIGGBY® COFFEE’s medium blend’s buttery, nutty, and sweet flavors bring out the rich notes of dark chocolate and fruit in Arcadia Brewing Company’s porter. The blend also makes a great brewed coffee option for the morning as well as a perfect compliment to the beer. When the day drags on and the night’s too long, it’s time to pickup a Morning Nightcap!