(Austin, TX) – We’re pleased to announce that this Friday, October 14th at 4pm, we’ll be releasing our second batch ever of Jester King Buddha’s Brew! Buddha’s Brew is our farmhouse ale blended and refermented with Classic Kombucha from Buddha’s Brew Kombucha in Austin, Texas. 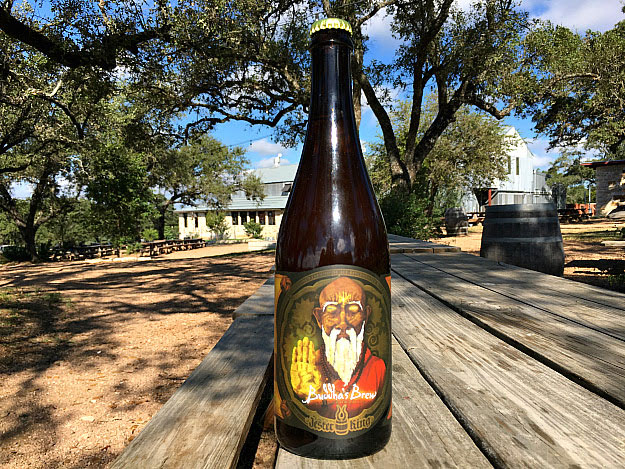 Buddha’s Brew, which was first released in 2012, harkens back to the early origins of Jester King Brewery. Its first incarnation was a homebrew experiment where I tossed dregs from Buddha’s Brew Classic Kombucha into a batch of beer at bottling to see what would happen. After about a month of bottle conditioning, the beer had been fundamentally transformed by the microbes in the kombucha and became something entirely unto itself. This homebrew experiment provided the inspiration for Buddha’s Brew Batch 1.

This mentality and approach still strongly guides us to this day. We like to introduce a host of microorganisms that are beyond our knowledge and control into a beer, and then see what happens. Ultimately, after much time and patience, we use our palates to accept what we think is good, and reject what we think is bad. That’s probably the most distilled version of what we do.

We’re excited to have Buddha’s Brew back and for people to taste it again! We’d say the microorganisms in the “raw buch” definitely “took” during this go around. The beer tastes and smells remarkably different now that it has been blended and refermented with kombucha. Speaking of blending, Buddha’s Brew is 90% farmhouse ale and 10% kombucha. In a way, Buddha’s Brew can be looked at as a “culture swap” with our friends at Buddha’s Brew.

Speaking of Buddha’s Brew Kombucha, they’ll be at Jester King this Saturday afternoon to celebrate the release! They’ll be sampling their delicious Kombucha for our tasting room guests.

Buddha’s Brew will go on sale this Friday at 4pm at our tasting room. It will be available by the glass, as well as in bottles to go. We have about 4,000 bottles available with a limit of three per customer per day (750ml/$14). At this point, we do not foresee Buddha’s Brew being available outside our tasting room aside from special events.