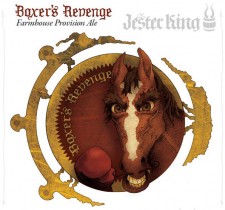 All three of Jester King’s year-round farmhouse ales are aged in oak wine barrels with wild yeast after undergoing an initial fermentation with French farmhouse yeast. After aging, the individual barrels are blended to taste.

Boxer’s Revenge is inspired by the hearty “stock ales” or “provision ales” produced by some of iconic farmhouse breweries located along the Franco-Belgian border and named in honor of the stalwart workhorse in George Orwell’s Animal Farm. It combines delicate notes of tropical fruit, citrus and spice from the primary French farmhouse yeast with tart, rustic, earthy notes from the Brettanomyces. A final dry-hopping with fresh Cascade and Centennial hops adds yet another layer of depth and complexity.

Following Jester King’s Grand Opening Celebration, Boxer’s Revenge will be available on draught at a small number of accounts throughout Texas. In the months that follow, it will be released as a regular, year-round offering in both kegs and 750mL, amber, champagne-style bottles. Please see the attached information sheet about Boxer’s Revenge.

Jester King Craft brewery is an authentic farmhouse brewery in the beautiful Texas Hill Country, on the outskirts of Austin. For more information, please visit www.jesterkingbrewery.com.