WILMINGTON, DE – On Friday, September 5, beginning at 5 p.m., all 10 regional Iron Hill Brewery & Restaurant locations will celebrate the end of summer and the beginning of a new season with the annual release of both The Great Imperial Pumpkin Ale and Classic Pumpkin Ale.  Iron Hill’s award-winning Pumpkin Ale will be available on draught at all 10 locations through Halloween (Friday, October 31), and pumpkin lovers will be able to take home The Great Imperial Pumpkin Ale in cork-finished 750 mL bottles for a limited time. 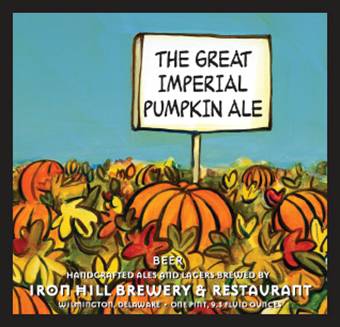 “I can’t think of a style of beer that we do here at Iron Hill that evokes such pomp and circumstance.  This is a release that our fans mark down on their calendars months and months in advance,”  says Director of Brewing Operations Mark Edelson.  “Pumpkin Ale is also one of our favorite beers to make, too, with its spicy and bold flavors – it really tastes like pumpkin pie in a glass – and we look forward to pouring our award-winning pumpkin ales throughout the season.”

Iron Hill’s Pumpkin Ale is a medium-bodied, copper-colored ale with malt-y sweetness and a balancing bitterness.  It is spiced with traditional pumpkin pie spices and vanilla, in lieu of finishing hops, for intensely seasonal flavor.  The Great Imperial Pumpkin Ale is a hearty autumnal beer brewed each year with more than 200 pounds of pumpkins, as well as pumpkin pie spices, molasses and Belgian candi sugar, giving it a rich flavor and heady aroma, evocative of wool sweaters, crisp evenings by the fire and all things fall.  Throughout the season, the beer will be sold as a Bottled Reserve, Iron Hill’s line of cork-finished 750 ml bottles, for $19.50.  The Great Imperial Pumpkin Ale’s collectible bottles feature a custom-designed label from local artist Jeff Schaller, inspired by the beloved comic strip Peanuts.

Highlighted events will include:

Founded by home brewers Kevin Finn and Mark Edelson and restaurateur Kevin Davies in Newark, DE in 1996, Iron Hill Brewery & Restaurant has blossomed from one restaurant and brewery to 10 locations across the mid-Atlantic, with an 11th location, in Ardmore, PA scheduled to open in the coming year.  Each restaurant is dedicated to producing and serving top-quality hand-crafted beers and cuisine in a warm and hospitable setting, and all are open seven days a week for lunch and dinner.

Would You Believe What Prairie Artisan Ales Is Bringing to GABF? Heavy Seas Welcomes Back Great’ER Pumpkin