Iron Hill Brewery & Restaurant continues their bold releases of craft beers to go with several fresh offerings for the summer, all vividly designed and creatively packaged in 16-oz. cans, bringing ever more of the scratch brewery’s popular beers and expanding portfolio into conveniently portable packaging. On Thursday, May 10, they will bring Hopicana into their canned collection for the first time, followed in June and July by classics Mahalo, Apollo!, Crusher and Ore House. 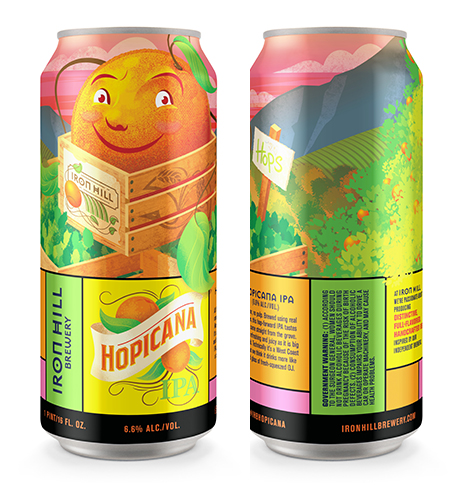 This marks the first time that Hopicana will be available in cans for in-store purchase, sold in convenient 4-packs of 16-oz. cans. All of the new cans will feature fun designs from Pittsburgh, PA’s Smith Brothers Agency, continuing an ongoing series of collaborations between the brewery and the firm that began with favorites such as Crusher and Mahalo, Apollo!

As always, the talented creative team at Smith Brothers sought to capture the spirit of the delicate hops and grains inside the cans with each label design and taking into account Iron Hill’s 21-year history.

About Iron Hill … Named after the historic Revolutionary War landmark in Delaware where General George Washington battled the British, Iron Hill is among the most enduringly successful craft breweries in the United States. Their 21-year consecutive medal-winning streak at national and international competitions is the longest by any independent craft brewery. Founded by home brewers Kevin Finn, Mark Edelson and restaurateur Kevin Davies in Newark, DE in 1996, Iron Hill Brewery & Restaurant has blossomed from one restaurant and brewery to 12 locations up and down the East Coast, including Pennsylvania, Delaware, New Jersey, and soon, South Carolina.

Each brewery/restaurant has their own scratch kitchen and craft brewery, allowing individual chefs and brewers the creativity to pair the freshest ingredients with the highest quality grains and hops. For 21 years, Iron Hill has incorporated beer into everything that they do. Finn, Edelson and Davies are recognized as innovative business leaders in their home state of Delaware and across the mid-Atlantic region. They started Iron Hill at a time when small breweries were just beginning to gain mass appeal around the country, and their entrepreneurial, forward-thinking approach helped build them into what they are today. Each Iron Hill location is dedicated to preparing the freshest ingredients and creating a friendly atmosphere for all age groups, helping change guests’ perceptions about brewpubs one meal, one pint and one community at a time.