(ESCONDIDO, CA) – This week Stone Brewing is releasing a bold and rich stout brewed with an abundant dose of whole espresso-roast coffee beans from San Diego-based roaster Ryan Bros. Coffee. A limited seasonal release, Stone Americano Stout is a modern-day throwback making its debut this week in 12-ounce six-packs at retailers and on draft to restaurants and bars where Stone beer is sold. 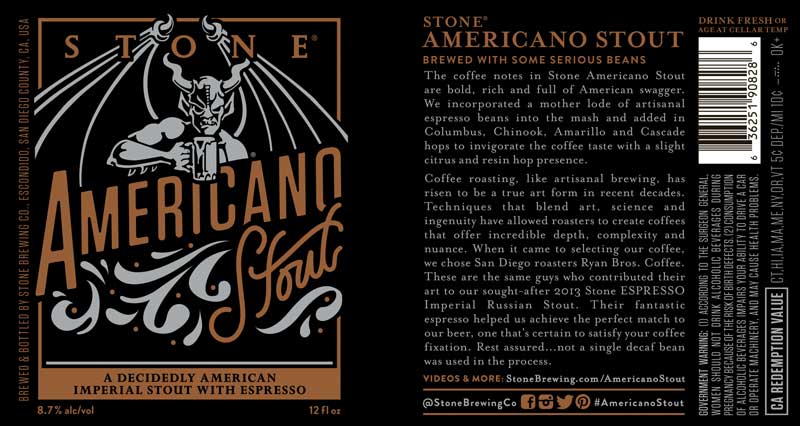 Coffee roasting has risen to become a true art form, and recently, craft brewers have embraced the depth, complexity and nuances created by this unconventional brewing ingredient. A nod to fan-favorite 2013 Stone ESPRESSO Imperial Russian Stout, Stone Americano Stout revisits a style our fans loved with the same Ryan Bros. coffee that left us buzzing for more almost three years ago.

“We decided to brew a beer with carefully selected ingredients, from the malt and hops to the locally roasted espresso beans,” explains Stone Brewmaster Mitch Steele. “In some ways, this recipe is a tribute to classic American stouts that were made by craft brewers in late 80s to early 90s. Because of our obsession with hops, we felt it was necessary to include a traditional Stone twist and up the hop factor to include four hop varietals: Amarillo, Cascade, Chinook and Columbus.”

Thanks to the malt bill, roasted and deep cocoa flavors are present to perfectly balance the strong notes of coffee. For each 120-barrel batch, 250 pounds of beans were added to the mash kettle and post-fermentation, creating prevalent coffee character with a lingering bitterness. This beer is made complete with a hop bill composed of classic American varieties, which invigorate the coffee taste with a fruity and citrusy hop presence.

Fans will be able to find Stone Americano Stout in limited quantities through May. Enjoy fresh or store at proper cellaring temperatures (55°F or lower). Over time, all flavors will meld together and allow for more toasted grain character to shine through. Regardless of when you choose to experience the intense coffee qualities, rest assured…not a single decaf bean was used in the process.

About Stone Brewing
Founded by Greg Koch and Steve Wagner in 1996, San Diego-based Stone Brewing is the 9th largest craft brewer in the United States. Stone has been listed on the Inc. 500 | 5000 Fastest Growing Private Companies list 11 times, and has been called the “All-time Top Brewery on Planet Earth” by BeerAdvocate magazine twice. The multifaceted company will be the first American craft brewer to independently build, own and operate a brewery in Europe, and is also building a production brewery and destination restaurant in Richmond, Virginia. Brewing at both locations is anticipated to begin in spring 2016. Known for its bold, flavorful and largely hop-centric beers, Stone has earned a reputation for brewing outstanding, unique beers while maintaining an unwavering commitment to sustainability, business ethics, philanthropy and the art of brewing. For more information on Stone Brewing, please visit StoneBrewing.com or the company’s social media sites: Facebook, Google+, Instagram, Pinterest, Twitter and The Stone Blog.