(Harrisburg,PA) – Tröegs Brewery announces a collaboration beer between themselves, Appalachian Brewing and Pizza Boy Brewing for the first ever Harrisburg Beer Week. Cheers 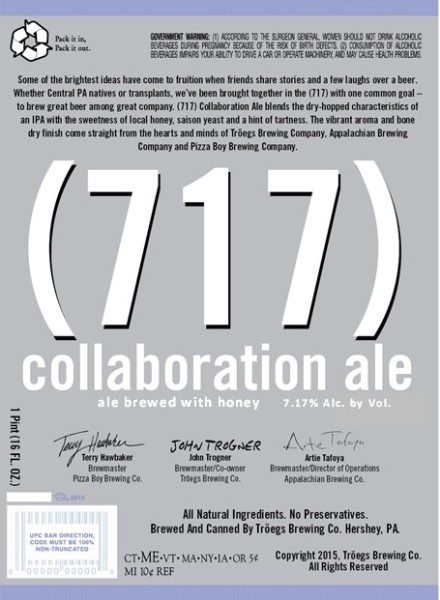 Some of the brightest ideas have come to fruition when friends share stories and a few laughs over a beer. Whether Central PA natives or transplants, we’ve been brought together in the (717) with one common goal – to brew great beer among great company.

Brewed especially for the inaugural Harrisburg Beer Week, (717) Collaboration represents a joint endeavor between Tröegs, Appalachian Brewing Company and Pizza Boy Brewing Company. This spirited ale blends dry-hopped characteristics of an IPA with sweetness of local honey, saison yeast, and a hint of tartness to deliver a vibrant aroma and bone dry finish. We also utilized malted barley that was steeped, floor-malted and then kilned especially for this beer by Deer Creek Malthouse, a local producer of artisan malts from the Philadelphia area.

“We’re excited to be an integral part of the first Harrisburg Beer Week,” said Chris Trogner. “Harrisburg will always be part of who we are. Beer Week not only celebrates our roots but also looks to the future as we welcome new breweries and enjoy continued success of the craft beer industry throughout Central PA.” We will package (717) Collaboration Ale in 4-packs of 16-ounce cans, which will be available at all three participating breweries as well as exclusively throughout the (717) area code. A portion of all proceeds from sales will benefit Harrisburg River Rescue, the beneficiary of Harrisburg Beer Week. “This beer is as much about the act of brewing the beer as it is about drinking it,” said John Trogner. “It’s about sharing stories and ideas with each other and our desire to explore our collective curiosities.”