How is Mikkeller DTLA Coming Along?

Los Angeles has officially cemented itself as a beer city. Though there’s no shortage of great beer options, with over 40 breweries and California staples Firestone Walker and Lagunitas on their way to opening operations in LA, we’ve officially caught international attention with the announcement of a Mikkeller bar in downtown Los Angeles. 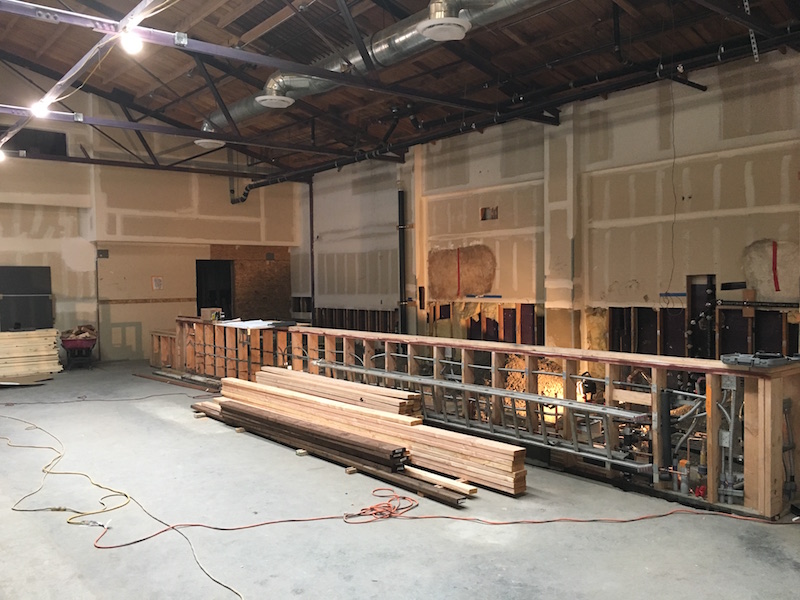 Mikkeller DTLA, as the space has been named, is very much a work in progress at this point. They have been working on the space for about six months and the flow of the space is starting to materialize. A tire store in a former life, the space will showcase the Scandinavian design aesthetic that Mikkeller bars have come to be known for. The main area will feature a bar spanning the back wall featuring fifty taps balanced out by windowed roll up doors opening up to Olympic Boulevard on the opposing wall. The central part of the building is split between the kitchen and a private dining area, while the corner of the building will house a cafe and, permits willing at some point, possibly a bottle shop.

The beer lineup will most likely be a split of half Mikkeller beers and half local and California brews. Though not installed yet, their tap system will be direct draw with three different temperature options to provide an optimal pour for any draft beer. For food, look for similar options to Mikkeller Bar SF in San Francisco, as the man behind the operations of that bar is also taking charge of Mikkeller DTLA.

Now for the bad news. First off there’s no parking for the bar. Maybe they’ll get a valet, otherwise you will be at the mercy of the Downtown LA parking gods (a spiteful and petty bunch to say the least). The other bummer is that they have no plans to incorporate any brewing operations into this location. This decision makes perfect sense with Mikkeller San Diego (a brewery in partnership with Alesmith) coming online in the very near future, which I’m sure Mikkeller DTLA will see the bounties of. But this decision also means no growler fills, as this location is permitted as a bar and not a shared permit with the San Diego brewery. Assuming they are able to eventually work a bottle shop into the space this may become a non-issue.

With construction moving along at a very brisk pace, they are hoping to have Mikkeller DTLA open within the next six to nine months. Though they do have some of the permits already lined up, there are a few that will still need to be signed off on. That being said, even the bar baron of Downtown LA, Cedd Moses, ran into red tape with the city that delayed the opening of Arts District Brewing. So don’t be alarmed if Mikkeller DTLA’s grand opening falls outside of the six to nine month window.