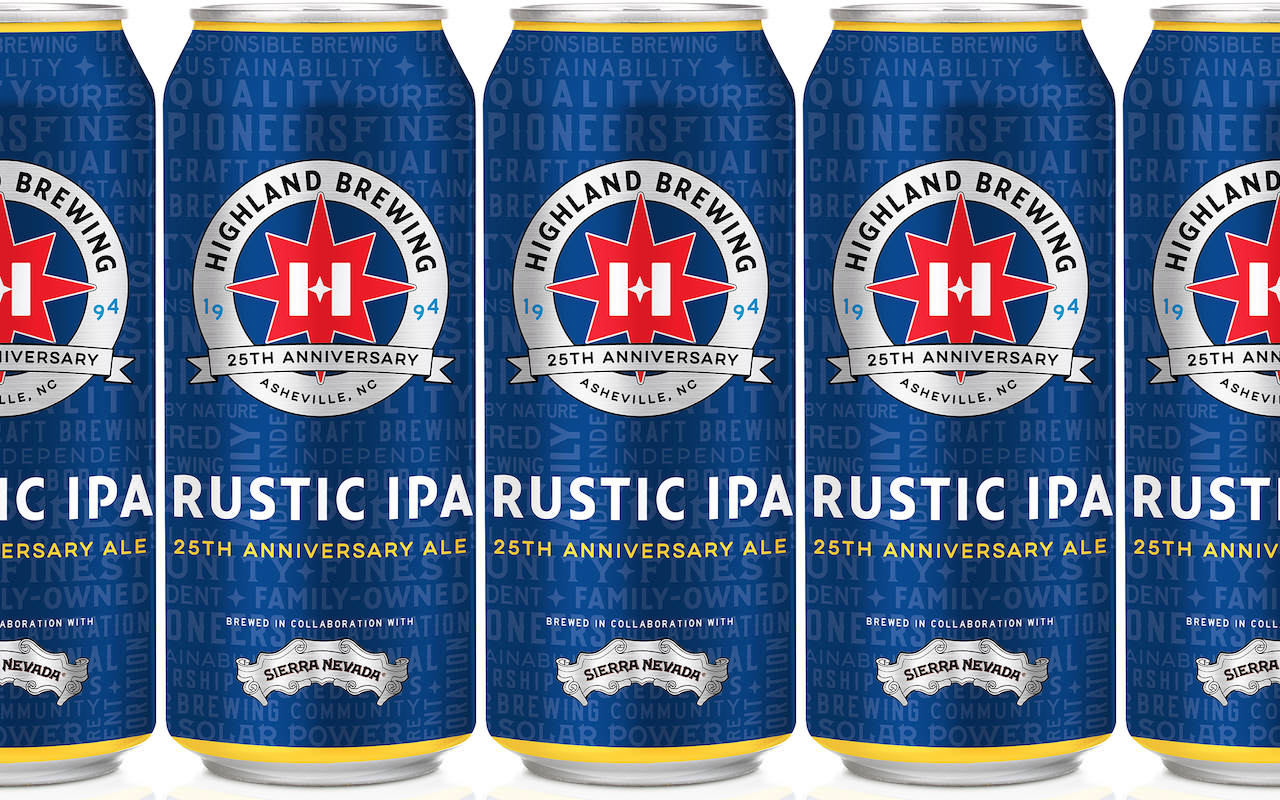 Brian Grossman, Family-Owner and Second-Generation Brewer for Sierra Nevada in Mills River, said, “When Sierra Nevada chose to build our second brewery in Asheville, Highland welcomed us with open arms. Being multi- generational, family-owned companies, we share similar values and experiences. We were proud to collaborate with our friends to brew a special beer to celebrate their 25th anniversary. “

Rustic IPA blends experimental hops like Motueka, Zappa, Azacca, and Strata that lend notes of tropical fruit and lemongrass to the brew. Fruity hop character is accentuated by a soft, hazy malt bill featuring flaked oats, rye, pilsner malt, and wheat. At 5.8% ABV and 45 IBUs, this beer is a balanced showcase for the best of innovation and tradition from each of the collaborators.

“Good businesses are built on relationships and we genuinely enjoy and are proud of our relationships with Sierra Nevada and these suppliers,” said Family-Owner and President of Highland Brewing, Leah Ashburn. “Brian and I are in a small group of second-generation family leaders in craft beer and we intend to build a sustainable future for both our breweries. This collaboration beer celebrates that future.”

Rustic IPA will be available as a limited release in 16-ounce four-pack cans and on draft in North Carolina, Tennessee, and South Carolina. The special collaboration brew will be released alongside Slow Crush – Highland’s new year-round tart spritz ale – as part of the brewery’s two-day anniversary festivities May 3-4, along with exclusive small batch and barrel-aged beers. The anniversary party will feature local live music, fantastic food, and more.

Highland Brewing was founded in 1994 by retired engineer and entrepreneur Oscar Wong, establishing it as the pioneer of Asheville, NC’s now booming craft beer industry. Proudly regional, Highland’s beers are distributed in North Carolina, South Carolina, Virginia, Tennessee, Georgia, and Florida. Highland is committed to quality and sustainability, boasting the third largest solar array in an American craft brewery. Today, the company is led by Wong’s daughter, Leah Wong Ashburn, and serves as the largest family- owned brewery native to the Southeast. Located in a rehabilitated manufacturing facility on a hilltop, the brewery affords space for thousands of visitors to enjoy limited release beers, tours, and live music. In addition, the event center and rooftop are available for private events. For more information, visit www.highlandbrewing.com. Follow Highland on Twitter at @HighlandBrews and Instagram at @HighlandBrewing. Become a fan on Facebook at facebook.com/HighlandBrewingCompany.