Asheville, NC – With the new year comes a new seasonal release in Hi-Wire Brewing’s lineup. Death Defying Spring Ale will replace Contortionist Black IPA as Hi-Wire’s annual spring seasonal release. Copper in color and light on the palate, Death Defying is an approachable and easy to drink Belgian ale, an appropriately timed option for those ready to unthaw from cold months and heavy dark beers. 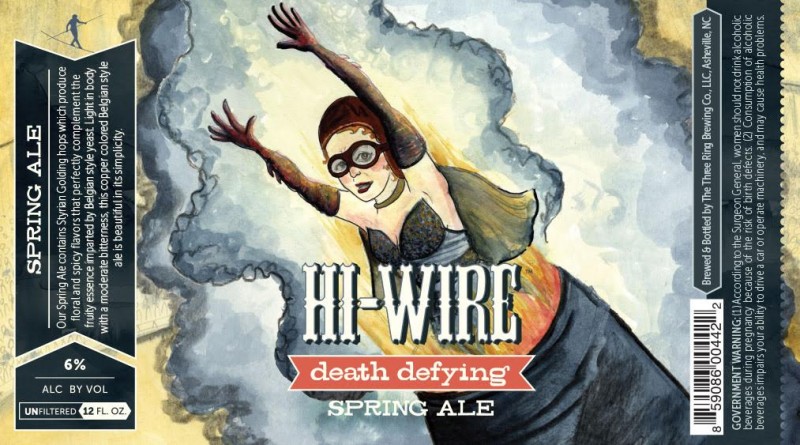 “The main goal of this beer,” stated Luke Holgate, Hi-Wire Brewing’s Head Brewer, “was to match the yeast profile to the hop profile. And I believe we really accomplished that with this beer.”

The 6% ABV Death Defying will hit shelves in six-packs across North Carolina, South Carolina and Tennessee this week. The spring ale will also be available on draft in numerous bars and restaurants across these territories through March.

Hi-Wire’s New Lineup of Beers
In summer of 2015 Hi-Wire Brewing opened a 27,000 square foot production brewery in the Biltmore Village area of Asheville, North Carolina. This took the then two-year-old brewery from a single, small tasting room to a regional brewery with two locations that boasts a combined capacity of 70,000 barrels. This increase in space gave the brewery the opportunity to expand the variety of beers they offered craft beer lovers. As a result Hi-Wire has expanded their portfolio to include a quarterly release of lagers as well as a wide variety of small-batch specialty ales.

About Hi-Wire Brewing
Located in Asheville, NC, Hi-Wire Brewing is known for producing approachable and balanced ales and lagers, most notably Hi-Wire Lager, Prime Time Session Pale Ale, Bed of Nails Brown, and Hi-Pitch IPA. They have two locations in Asheville; the 27,000 square foot Big Top Production Facility and Taproom located a half mile from the Biltmore Estate and the South Slope Specialty Brewery and Taproom located in the South Slope region of downtown. Hi-Wire was awarded the most medals at the 2014 NC Brewer’s Cup and was named Best New North Carolina Brewery of 2013 by RateBeer. Their award-winning beers can be found on draft and in bottles across North Carolina, South Carolina and Tennessee.